Who really knows the right way to heaven? 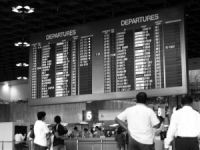 by Steve Ridgell (08/25/2010) | Hope for Life
I was standing near the gate waiting to board my flight when a man came running up demanding, “Am I too late?” When he realized that nobody was boarding, he went to the ticket counter for an explanation. The attendant explained that the gate assignment for his flight had been changed. He was now at the wrong gate. He showed her his boarding pass and continued to insist that this was his flight. She continued to explain that if he boarded this flight he would not end up where he wanted to go. Finally, he realized that he was wrong and sprinted off trying to reach the correct gate before the last boarding call.

Heaven is like that. I sometimes hear people talk as if they can decide the correct way to God. As if it is our decision how to repair our broken relationship with Him. God is very clear about the correct way to reach heaven – through Jesus. And the way to Jesus is clear – be born again. It does not matter what anyone tells you, or even what you are convinced is right. God is the only one who can fix our relationship with Him. And He makes it clear how to do that. The only way to do that.

So why listen to me? It really doesn’t matter what I say. And you are right. Do not assume that I am telling you the correct way to heaven. See what God said. If you would like to know more about what God says about the only way back to Him, I’ll be happy to share where He said it. So you can see it for yourself, know it for yourself, and be certain for yourself. Not because someone told you, but because God told you. So write me at steve@hopeforlife.org. Or join the discussion at www.hopeforlife.org.

Sometimes there really is only one way.
(Expressed written consent must be obtained prior to republishing, retransmitting or otherwise reusing the content of this article.

"Right Destination, Wrong Gate" by Steve Ridgell is licensed under a Creative Commons License. Heartlight encourages you to share this material with others in church bulletins, personal emails, and other non-commercial uses. Please see our Usage Guidelines for more information.