The House That Fear Built

Some people will do anything to avoid dying 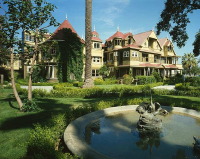 by Tim Archer (06/09/2010) | Hope for Life
Have you heard of the Winchester Mystery House? The sprawling house in San Jose, California, is famous for its huge size and irregular layout. It was under constant construction for 38 years, eventually coming to have almost 160 rooms.

Despite its great size, the house can be considered unfinished in many ways. There are dozens of doors that open on blank walls, others with knobs on only one side and inside doors with screens on them. There are stairways that reach no destination, chimneys with no stoves, and floors that you can see through.

The construction shows a fascination with the number 13. All the stairways are constructed in series of 13 steps. The chandeliers all have 13 lights. Every wall has 13 panels. Each glass door has 13 pieces.

Who would build such a house?

The mansion was built by Sarah Winchester, the widow of William Winchester (of the Winchester family that owned the famous rifle company). According to Wikipedia (search on “Winchester Mystery House”), the June 1937 issue of Modern Mechanix has a story that provides insight. Another story version relates that after the death of her husband and infant daughter, Winchester was told by a medium that she must build a house that was never completed; if the house were ever completed, Sarah Winchester would die.

Because of this, the fearful widow maintained her house in a constant state of construction. Her attempt to avoid death failed, of course. On September 5, 1922, Sarah Winchester died. Work immediately stopped on the house, and it remains as a monument to one woman's fear of death.

Was Sarah Winchester the only person afraid of dying? How many others would do whatever it takes to avoid the inevitable?

A favorite passage of mine is found in Hebrews, and it talks about that very fear: "Since the children have flesh and blood, he too shared in their humanity so that by his death he might destroy him who holds the power of death—that is, the devil— and free those who all their lives were held in slavery by their fear of death" (Hebrews 2:14-15). Jesus came to free everyone held captive by the fear of death.

Building a house can't free us from death
Jesus has defeated death, and he invites us to share in his victory. There is no need to live fearing death. We have a champion who can rescue us from that fear.

Building a house can't free us from death. Building a relationship with Jesus will do just that. If you'd like to know more, contact me via the HopeForLife.org website or send me an e-mail at tarcher@heraldoftruth.org.

"The House That Fear Built" by Tim Archer is licensed under a Creative Commons License. Heartlight encourages you to share this material with others in church bulletins, personal emails, and other non-commercial uses. Please see our Usage Guidelines for more information.