What is your letter? 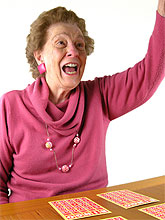 Indulge me a moment. Think of life like a Bingo game.

You come into the game with one card and it's yours for life. As time goes by, God calls out numbers. Sometimes HE calls a friend or a member of your family, but at times, when you least expect it, HE calls your number.

Most of us travel through life, thinking we are in charge. We play the game till our numbers line up and point us to victory. We try to move heaven and earth to find a way that makes sense. The goal, after all, is to make the pieces fit, to line up the numbers, to win.

If we spend all of our lives thinking that is the goal, then we have missed the point all together. The goal is to hear God call our number and to watch God move heaven and earth to get exactly what HE wants.

God calls our number when HE is ready, not when we think it's time or past time. To us it makes sense to line up all the numbers; to God it makes sense to move his people into position for this life and the next.

I have friends who never quite understood why God called their numbers. Life seemed to never be complete. Understanding eluded them till they moved off the card into the next world. Now it all makes sense.

We get distracted by trying to figure out the clues; we want to understand how God connects the dots. We want life to make sense, to have meaning and purpose. It does, but sometimes it's a mystery. So enjoy! When God calls your number, step out and claim the moment. Take the challenge. Listen for HIS voice.

HE knows how it all fits and when it makes sense.

Rich was very comfortable doing exactly what he had been doing, but these crazy people kept hounding him. They want him on their shortlist for the next CEO of World Vision. "Were they out of their minds?" he thought.

At the close of a conversation with a member of the search committee, Rich was asked, "If you are selected for this job, you will have to travel to some of the worst places in the world. You will be exposed to heartbreaking things: children living in garbage dumps, women who have lost their children to disease, people on their deathbeds with AIDS. Are you comfortable with that?"

"Comfortable?" Rich gasped. "I am so uncomfortable with that, I can't even express it! I am terrified! I am not the guy you want at your bedside in the midst of your suffering."

For days Rich pushed this pending venture as far away as he could.

Then came that bewildering morning call, "Rich, this is Bob. I've gathered the six members of the search committee together and asked them to write their first choice on a slip of paper, fold it, and pass it to me. Your name was on each one. You've got the job!"

After he calmed down a bit, Rich told Bob, "Well, you better keep the second guy on the hook."

Then, just before Rich and his wife were to fly to Seattle to do a little first-hand World Vision investigation, Keith, well-healed entrepreneur, surprised Rich with a job offer that would mean millions of dollars in options.

Rich was interested, but he had to tell Keith of his dilemma without revealing the World Vision name. "We have to go check out this charitable organization. I have to finish the process, regardless. Then, I'll give you an answer."

Keith was amazed that Rich was even considering leaving his career, but out of the blue he began ...

"Decades ago," he stated, "my wife and I adopted a little girl from India. Then at age ten she died. The loss tore us apart. Months later I was going through the mail and saw an appeal from a group called World Vision. I responded and they connected me with a new "daughter." For years we wrote. If that's the kind of thing you are leaving business to do, well, that I can understand."

"World Vision IS the group, Keith. They want me to be their US President."

God was calling Rich's number. B1

Read about Rich and World Vision in "The Hole in Our Gospel," by Richard Stearns.

Looking back on your life, when has God called your name, surprised you with something unexpected and out-of-the-box?

Have you thanked HIM?

Are you still listening? The call usually comes when you are comfortable or have your eye focused somewhere else. Don't try to fit all of life together. Take it one number at a time.

One night Eli, whose eyes were becoming so weak that he could barely see, was lying down in his usual place. The lamp of God had not yet gone out, and Samuel was lying down in the house of the LORD, where the ark of God was. 4 Then the LORD called Samuel.

But Eli said, "I did not call; go back and lie down." So he went and lay down.

Again the LORD called, "Samuel!" And Samuel got up and went to Eli and said, "Here I am; you called me."

Now Samuel did not yet know the LORD: The word of the LORD had not yet been revealed to him.

A third time the LORD called, "Samuel!" And Samuel got up and went to Eli and said, "Here I am; you called me."

Then Eli realized that the LORD was calling the boy. So Eli told Samuel, "Go and lie down, and if he calls you, say, 'Speak, LORD, for your servant is listening.'" So Samuel went and lay down in his place.

The LORD came and stood there, calling as at the other times, "Samuel! Samuel!"

Then Samuel said, "Speak, for your servant is listening"

"Does God Play Bingo?" by Ron Rose is licensed under a Creative Commons License. Heartlight encourages you to share this material with others in church bulletins, personal emails, and other non-commercial uses. Please see our Usage Guidelines for more information.