So who do you need to be good? 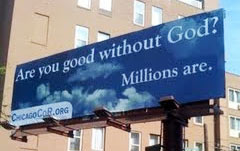 You, however, did not come to know Christ that way. Surely you heard of him and were taught in him in accordance with the truth that is in Jesus. You were taught, with regard to your former way of life, to put off your old self, which is being corrupted by its deceitful desires; to be made new in the attitude of your minds; and to put on the new self, created to be like God in true righteousness and holiness (Ephesians 4:20-24 NIV).

Earlier this week, an organization called The Chicago Coalition of Reason put up a billboard at the corner of Grand and LaSalle Avenues in downtown Chicago that's generated some discussion and debate. The CoR is an atheist organization that promotes the idea that "humanists, agnostics and atheists are as normal as anyone else. We're your friends, neighbors and family members. We care about our communities and are true to our values."

Their billboard, which CoR members say is to "break the stereotype that atheists are evil and end the subtle discrimination that unfolds as a result." It reads: "Are you good without God? Millions are."

Well, frankly, I long ago gave up the notion that people who believe in God are necessarily nicer or better or more virtuous or more ethical than people who don't. People are good — or not — for a whole slew of reasons that may or may not have to do with faith in God. The question I have about atheists and morality is this: "Who tells us what 'good' is?" Is it enough to be true to our values if our values are mixed up?

Actually, though, that's a good question to ask folks who claim belief in God, too.

Are you good without God?

I think the billboard has a double meaning, and I want to look at both meanings. Are you good without God — as in, "Are you OK without God? Do you need him to make your choices and live your life?" Christians, of course, would generally make the right noise about needing him. If you pinned a thousand self-identified Christians down, you might get five who'd say, "Actually, I can generally get by just fine without God, yes." We're conditioned to talk about faith and trust and depending on God's grace, and most of us can hit all the right notes.

But sometimes I think we live as though we're actually pretty good — pretty OK — without God. When we make our decisions based on what "seems OK" or "feels right," we're living as if God has nothing we need. When we know what's right and still choose to do what's wrong, we conduct ourselves as if our own conscience and value system are the true measures of character, integrity, and virtue. When we lean on our own talents, resources, and schemes to get what we think we want, we deny that there's any area of our lives in which we need his grace, wisdom, and strength. When we make our plans and carry them out without prayer and advice from other believers, we walk as if there's no one to lead us. When we live torn by doubt, worry, and fear, we choose to live as if we don't know the gracious Father in heaven who provides for our needs.

Paul reminds the followers of Jesus in Ephesus of what their lives had been like, so he can remind them of who they claim to be now. Their predicament was darkened understanding, hard hearts, separation from God, and an intensifying desire to do evil inversely proportionate to their declining sensitivity to the Holy Spirit. "Futility" is the word Paul uses to describe their lives.

I'm not in any way OK without him!
"You, however, didn't come to know Christ that way," he reminds them. That's a good thing to say to ourselves sometimes, when our lives haven't been reflecting "the truth that is in Jesus." What we've come to faith in isn't a set of laws. We've come to believe in a person: a person who says that there are parts of our lives that have been soiled by sin and need to be taken off like a dirty shirt. A person who makes it possible for us to be renewed and put on a new life that more accurately reflects the righteousness and holiness of our God.

So that billboard provides me with a chance to look in the metaphorical mirror and ask myself if I'm carrying on as if I'm good without God. Or does my life reflect that I need him? Do I try to obey him, even when it's inconvenient? Does the amount of time I spend in prayer and with the Bible and with the church show that I'm living in dependence on him? Does my hope rest on earning potential or net worth or my particular set of talents or my work ethic, or in God and his generous providence?

"There is no one righteous, not even one," the Bible reminds us. So, no, none of us can be good without God. That's true for all of us, atheists and believers alike. The first lie the devil told human beings was, "You'll be like God, knowing good and evil." It is a lie, though, on two fronts. We usually can't see much beyond our own immediate benefit or disadvantage when trying to determine what's right and wrong. And on those rare occasions when we do come up with the right answer, it's at best even money if we'll follow through and actually do what we recognized as right.

And so God, in Christ, stepped in. In being faithful to death, he lived what was right. In his death and resurrection, he brought about redemption and forgiveness from our sins and victory over sin and death. And he poured out his Spirit, God present in us, to give us the wisdom to know right from wrong and the strength to live it.

Good without God? I'm barely tolerable with him.

Maybe I should put that on a billboard.

"Good without God?" by Patrick D. Odum is licensed under a Creative Commons License. Heartlight encourages you to share this material with others in church bulletins, personal emails, and other non-commercial uses. Please see our Usage Guidelines for more information.