What are you going to do in the new financial environment? 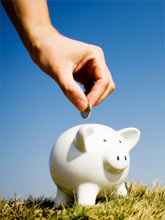 by Rubel Shelly (07/27/2009) | Leading in Hope
People are beginning to realize (and even admit!) there are things to be learned from all that has caused so much pain, moaning, and bizarre reactions over the past year or so. The current recession has amounted to a wake-up call to some and a reminder to others.

The reminder has come to those who have lived a bit longer and who climbed the economic success ladder through several decades of hard work. They remember what it was like before they could slap down plastic for every whim and be impulse shoppers. They recall things such as paying cash, saving to purchase, and repairing rather than tossing away and buying new.

The wake-up call has been to the children and grandchildren of the people just described. It has even become trendy for them to compare notes with their once-extravagant peers about bargains found or the joy of eating at home. For some the motivation is not a shrinking paycheck so much as an enlarged environmental consciousness. Whatever the motive, the outcome is that simplicity is making a comeback. Thrift is in vogue. Frugal is fashionable.

Michael Maniates, professor of Political and Environmental Science at Allegheny College, has been so bold as to put it this way:

Perhaps the silver lining [of the global recession] is that people are coming to realize they can live with less and their lives are richer for it.

A Gallup Poll taken in April and reported last week in "USA Today" found that 27% of those interviewed say they are saving money now. What a contrast that is to the spending patterns being reported two or three years ago! And 32% of those polled report they are not only spending less, but also intend for the pattern of less spending and more saving to be the "new normal" for their lives.

The 2009 MetLife Study of the American Dream produced another fascinating statistical insight. Nearly half of all consumers in the United States, 47%, report they already have what they need — up from only 34% in November 2006. I doubt the level of possessions owned changed so much as an attitude toward those possessions. Maybe something good has come from this mess.

Teach those who are rich in this world not to be proud and not to trust in their money, which is so unreliable. Their trust should be in God, who richly gives us all we need for our enjoyment. Tell them to use their money to do good. They should be rich in good works and generous to those in need, always being ready to share with others (1 Timothy 6:17-18 NLT).

"A New Normal" by Rubel Shelly is licensed under a Creative Commons License. Heartlight encourages you to share this material with others in church bulletins, personal emails, and other non-commercial uses. Please see our Usage Guidelines for more information.