Preaching Your Own Funeral

What will they say when it's time to put you away? 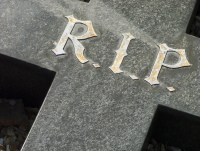 by Tim Archer (04/15/2009) | Hope for Life
There were two brothers who were the richest men in that small town. They were also the meanest and most immoral of men. When one of them died, the other went to the preacher of the local church and asked him to do the funeral. He said that he would give the church $25,000 if the preacher would say that his brother was a saint. "But I can't do that!" said the preacher, "Everyone knows what kind of man your brother was." But the more he thought about it, he realized that the church really needed that money. So on the day of the funeral he got up and said, "This man was a lying, cheating, stealing, wicked old man. But next to his brother, he was a saint."

Someday, when we're gone, somebody is going to have to stand up and say a few words about our lives. When they stand up to talk about us, will it be an easy task or a hard one? Will they struggle to find something good to say or will they struggle to choose between all of the uplifting stories told of your life?

I remember when I was a student at Abilene Christian University, Jim Dotson, the preacher at Brookwood Way Church of Christ in Mansfield, Ohio, preached a funeral sermon that became famous. His sermon was videotaped and can still be viewed in the ACU library. Dotson's sermon did not become famous because of its content nor because of the outstanding delivery. Dotson's funeral sermon became famous because he preached his own funeral. Dying of cancer, he videotaped the funeral sermon. He spoke about the Christian's victory over death.

It's a remarkable thing to preach your own funeral. That is, it's remarkable to videotape yourself speaking so that everyone hears the exact words that you wanted them to hear. But the fact is, we all do our own funeral sermons. By the way we live. No matter what the minister says at the service itself, our lives will leave behind their own testimony, for good or for bad.

So what does your sermon sound like so far? Is it full of jokes and stories, but little substance? Is it a shining example of what everyone would like their life to be? Or, to borrow a phrase from a calendar I saw, is the main purpose of your life to serve as a warning for others?

We're writing our own funeral sermon, day by day
Make someone's job a little easier! Don't make them hunt and scrounge for something good to say. Don't make it hard for them to find words of comfort for those left behind. Live such a life that your funeral will be a celebration of triumph, a joyous remembrance of a life well lived. To know more about how to do that, write to me at tim@hopeforlife.org or leave a comment on our HopeforLife.org blog.
(Expressed written consent must be obtained prior to republishing, retransmitting or otherwise reusing the content of this article. Contact us at info@hopeforlife.org)

"Preaching Your Own Funeral" by Tim Archer is licensed under a Creative Commons License. Heartlight encourages you to share this material with others in church bulletins, personal emails, and other non-commercial uses. Please see our Usage Guidelines for more information.