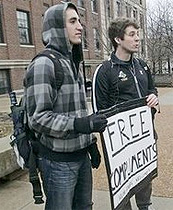 Each of you should use whatever gift you have received to serve others, as faithful stewards of God's grace in its various forms. If you speak, you should do so as one who speaks the very words of God (1 Peter 4:10-11).

They were tired of it. Tired of people being grumpy, depressed, and worried. Tired of always worrying about the current economic climate. So Cameron Brown and Brett Westcott decided to do something to bring a little light and joy to their corner of the world — which happens to be Purdue University.

They became The Compliment Guys.

That's what everyone calls them, anyway. Every Wednesday afternoon from 12:30 to 2:30, Cameron and Brett set up their "Free Compliments" sign near a main walkway outside the chemistry building. Rain, snow, sleet, cold — whatever the weather, The Compliment Guys are "In." For those two hours on Wednesday, they live up to their name. Every person who walks by gets a compliment. To a guy in Purdue sweats they say, "Love your school spirit." To a woman carrying a trendy black bag: "Very nice purse." "It's very large." To the student who ran past them in knee-high leather boots: "I like your hustle." "I like your boots, too."

The guys try to be very personal and specific in their compliments, too. "I like your red coat," Westcott says to a woman listening to her iPod. She turned and laughed, which prompted Brown to say, "Very nice smile." Three women leaving biology lab purposely walked by them. "I like your curly hair. Great smile. I like your glasses," the guys said, pointing to each of the women. One Wednesday, they told a professor to enjoy his coffee, thanked the groundskeepers for their hard work and encouraged someone eating an apple to "stay nutritious."

While most people react positively, the guys sometimes get ignored, or get nasty looks, or the occasional obscene gesture. They get accused of being there only to pick up girls. (They both have girlfriends.) Some think it's a psychology experiment. But Brett Westcott says their reasons for being The Compliment Guys are pretty straightforward, if not too sophisticated: "Just overall, making people's day is really satisfying. Not enough people do nice things anymore."

I don't know about you, but I think The Compliment Guys might be on to something.

We're a culture that doesn't take seriously the power of words. Strange, when you think about how many words we speak, process, e-mail, and text every day. Everywhere we look, there are words: on signs, on screens, on forms and petitions, in documents and books, on labels and menus, billboards and bumper stickers. Everywhere we go, people are speaking: cell phones clamped to ears as they walk, Bluetooths (Blueteeth?) clipped to ears while they drive, in meetings and at coffee shops, in schools and churches and offices and bars and restaurants, over dinner with family and over conference calls with the home office. So many words.

So many words. So little thought.

We can try to do better at least, can't we?
No wonder members of some religious orders take vows of silence. When you discipline yourself not to speak at all, you gain a better understanding of the value of words, in much the same way as a person who's fasting understands the value of food. Maybe we Christians should give more thought to the vow of silence. I can certainly think of situations that would have worked out much better if I had taken one.

Or maybe better, let's discipline ourselves to use words more carefully. That's where I think The Compliment Guys have it right. They're making a choice to use words to "make peoples' day." They're disciplining themselves, at least for two hours on Wednesday afternoons, to speak in ways that are positive, affirming, and encouraging. I suspect, too, that those two hours on Wednesday carry over, at least to some extent, in the ways that they speak when they're "off duty."

"If you speak," wrote Peter, "you should do so as one who speaks the very words of God." I love that it's Peter, of all people, who wrote that. Peter, the guy who was so well-acquainted with the taste of foot. The guy who swore he'd never desert Jesus, and then swore just as vehemently that he didn't know him. He learned, somewhere along the line, and by the time he was an elder statesman of the church he had learned how much words mattered. He had begun to regard words, and the opportunity to use them, as gifts from God. He understood that the faithful words of God's people are one of the many ways in which God's grace takes form in this world. So he wanted the church to take words seriously. He charged them to give careful thought to what they said, to consider whether or not the words coming from their mouths or pens were suitable vehicles for the grace of God to travel in. "If you say something, make sure it's something that wouldn't seem out of place coming from the mouth of God himself."

Well, we can try to do better at least, can't we? It might not work for you to set up your own "Free Compliment" stand at your own work or school. But then, there are other ways to bless people with your words than firing compliments at them as they walk by. We can speak encouraging words to someone who's having a bad day. We can be gentle and careful when we have to reprimand a child or an employee. We can remember to say "I love you" more often, and "Your problem is ..." less. We can speak truth, lovingly, to people who are spiraling out of control. We can tell the story of Jesus a little more often. We can add to and listen to slanderous, gossip-filled stories a lot less. We can choose to use words to defuse anger instead of adding to it. We can be quiet and give others a chance to speak, when that's what God is calling us to. And we can choose to use words to bless others, instead of gratifying ourselves or getting what we want.

Give it a try. You'll get the hang of it.

"Compliment Guys" by Patrick D. Odum is licensed under a Creative Commons License. Heartlight encourages you to share this material with others in church bulletins, personal emails, and other non-commercial uses. Please see our Usage Guidelines for more information.