Why do we keep getting up? 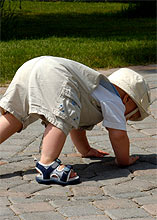 At the end of the movie Matrix Revolutions, Agent Smith stands above a beaten Neo and wonders aloud why his adversary continues to get up just to be beaten down:

Why, Mr. Anderson? Why do you do it? Why get up? Why keep fighting? Do you believe you're fighting for something? For more than your survival? Can you tell me what it is? Do you even know? Is it freedom? Or truth? Perhaps peace? Yes? No? Could it be for love? Illusions, Mr. Anderson. Vagaries of perception. The temporary constructs of a feeble human intellect trying desperately to justify an existence that is without meaning or purpose. And all of them as artificial as the Matrix itself, although only a human mind could invent something as insipid as love. You must be able to see it, Mr. Anderson. You must know it by now. You can't win. It's pointless to keep fighting. Why, Mr. Anderson? Why? Why do you persist?

Answer: It's in our DNA; we are made to get back up.

In 1803 President Thomas Jefferson sent Meriwether Lewis and William Clark on an adventure, an expedition up the Missouri River across the Rockies and down to the Pacific Ocean and back. For months they studied and planned. How many men? What skills? How big a boat? What design? What type of rifles? How much powder and lead? How many cooking pots? What tools? How much rations could be carried? What medicines? What scientific instruments? What books? How many fishing hooks? How much salt? Tobacco? Whiskey?

They expected to be gone for two years or more, totally cut off from known civilization. There would be no incoming letters, no orders, no fresh supplies, no reinforcements, nothing reaching them until they returned. They had invested months in plans, but now as they left the dock, they would find the plans were useless.

The process of planning — thinking of the possibilities ahead — was vital, but the plans themselves proved worthless. Like Dwight Eisenhower who lived more than a century later, they found that plans are useless, but planning is indispensable. The unexpected changes on the river rendered their plans inadequate. The adventure forced them to adapt and taught them to expect surprise. They endured incredible hardship in an unknown world. Why? Was it just a job?

No! Once we get up, we are made for adventure; we are put on this planet for discovery. Lewis and Clark got to see the unseen and unknown types of plants and animals. They got to meet strange new people. They were able to view breathtaking grandeur. Together, they experienced the new world firsthand, mapped it, wrote about it, and in the process were transformed by it. These ordinary men quit asking "Now what?" and woke up each morning wondering, "What's next?"

Are you hooked? Want answers? Got plans that seem useless? Have you been knocked down? It's time to toss the plans and open your eyes. Get up! He's ready to lift you. Remember it's in your DNA. Look outside the box; expect something new. Faith is the ultimate expedition; it's seeing the unseen, living beyond our circumstances. When we get knocked off our feet, it's the perfect time to change our perspective and let God lift us up. Then, if we let him, he will invade our imagination and give us new discoveries.

So, the expedition begins.

It happened a few weeks ago, but the shock is still sinking in. The conversation was short and somber. After eighteen years working a job he loved, Steve was given his notice. He would get a 30-day severance deal, but had to be out of his office by the end of the day.

"I was speechless," Steve said. "I knew things were slow, but I figured my job was safe. After all, I'd given some of my best years to that company." Steve had worked his way into management and dreamed that one day soon he would be a Vice-President, but all that was gone, vanished in a moment.

This is your hands-on adventure into a new world.
After a few uncomfortable seconds of silence, he protested, "Now what? What am I going to do?"

"Steve," I responded, "the question is not 'Now what?' it's 'What's next?' First, you are going to get up ... God's going to lift you. You can because God made you to get up. Second, once up you are going to live a new adventure. You will re-assess your worth, re-think your values, and re-live some memories. Then you will get up and get started on the next chapter. We're not homesteading here and we are not circling the wagons. Together, you and I are embarking on a new expedition, an adventure. We will plan and scheme and prepare, but in the end we will turn our imagination over to God and begin the journey, wherever it leads. God has given us abilities and gifts and good judgment and HIS presence and we will need them all as we blaze new trails."

"We will make the trip together."

When you are on an expedition it's always best to have a partner with skin on. Got one? Can you be one?

Like Steve experienced, in one way or another, this is your year of discovery; your year for a multifaceted, hands-on adventure into a new world. This adventure will stretch your horizon, reshape your worldview, introduce you to fascinating people, and leave you basking in memories of holy "Kodak moments."

It may begin in pain and doubt, but God has great plans for you. So, get up, give God your imagination, and gawk a little. There are unseen things all around you.

We remember before our God and Father your work produced by faith, your labor prompted by love, and your endurance inspired by hope in our Lord Jesus Christ (1 Thessalonians 1:3 TNIV).

"From 'Now What?' to 'What's Next?'" by Ron Rose is licensed under a Creative Commons License. Heartlight encourages you to share this material with others in church bulletins, personal emails, and other non-commercial uses. Please see our Usage Guidelines for more information.