The God Who Sees and Cares

Are we ministering beyond the curse? 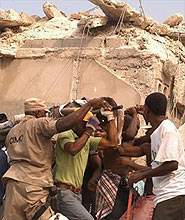 The LORD said, "I have indeed seen the misery of my people in Egypt. I have heard them crying out because of their slave drivers, and I am concerned about their suffering" (Exodus 3:7 TNIV).

You've seen the pictures, heard the reports. "Aftershocks" larger than what most countries call serious earthquakes. Numbers so astronomical that, after a while, they start to make us numb. "Thousands are dead," we say, and so we don't have to think much about those thousands of individuals and the thousands and thousands of individuals whose lives connected to them. When we talk about as many as a third of Haitians sleeping outside because they don't have safe shelter, we don't have to picture the faces of the men, women, and children in that mass of people.

There's something in us, a psychological switch that helps us cope with catastrophes like this one by keeping them at a distance. TV evangelist Pat Robertson's switch must have been flipped when he tried to connect the Haiti earthquake — and all of the other ills that nation has endured — to a "pact with the devil." According to Robertson, slaves on Hispaniola supposedly made the pact so that they'd have success in a revolt against their French masters, and that now the nation born in that revolt is under God's curse.

One problem with Robertson's theory is that it's based on a legend used to discredit the slaves and the revolt, and to explain the voodoo that's pretty widely practiced there. There was no pact with the devil, no Satanic bargain that makes Haiti's problems God's quid pro quo. Sorry, Pat. You can't explain such a tragedy so simply and easily.

I'm not really mad at Pat Robertson. His response struck me as more pointless than offensive. His organization's humanitarian arm is, apparently, at work providing supplies and other relief. He asked for prayers for the Haitian people. I really think Pat was doing what a lot of us do in circumstances like this: trying to keep some distance from the suffering by forcing it to make sense. There must be a reason, we think.

And there are reasons, of course. For one thing, government corruption and a global weariness about Haiti have led to the country's being stuck for decades as a "developing nation." They don't have the luxury of being prepared for emergencies like this. Substandard housing collapses in earthquakes. Subsistence economies, too. By and large, the people who survive this ordeal will be the people who can afford to survive, the people whose resources buy them better homes, medical care, food, water, and other necessities. As was true in Hurricane Katrina, or the tsunami in southeast Asia, or in most other natural and man-made disasters known to history, it's the poor who suffer most. They can't escape the effects of something like this.

So there's your reason, Pat. Curse? Only the curse that has infected our world since human beings first thought they knew better than their Creator. Pact with the devil? Personally, I think he's made much more progress by slyly teaching us that we aren't our brothers' keepers, aren't responsible for each other, are free to leave other human beings created by God alone in their poverty, pain, and hopelessness.

I get why Pat Robertson might not want to think about that. I get it, because sometimes I don't want to either. In some ways it's easier to explain away catastrophe than to kneel down beside someone who's trapped under the rubble and not shy away from getting our hands dirty helping him or her. I seem to remember Jesus' own followers arguing about how to explain a man's blindness theologically. Jesus shut them all up: "This happened so that the works of God might be displayed in him" (John 9:3). Then Jesus became the one through whom those works would be done. He engaged the man, interacted with him, even had him play a part in his own recovery. Jesus cared about the man enough to come alongside and heal him.

That, by the way, is what God does. He hears the cries of the people he loves, the people he made. That's Americans and Haitians, rich and poor, church people and unchurched people, Christians, Jews, Muslims, and so on. He's always come near when he's heard human beings crying out — never nearer than when he came in Jesus. When something like this earthquake happens, it's easy to ask, "Where is God?" God is in the middle of Port-au-Prince tonight, suffering with those who are suffering. He gets his hands dirty; he heals, he helps, he rescues, he comforts, he forgives, and he gives life.

Resist the urge to hold the suffering at arm's length.
Most of the time, he does so through us.

He doesn't ask us to explain away the suffering we see in the world. He doesn't need us to defend his reputation as a loving God through argument and debate — certainly not while people hurt and suffer and die. He asks us to be where he is, among his suffering people, doing his work. Not so we can gain new church members or make ourselves look good, but because in doing so we testify to the presence and power of the Kingdom of God.

That's the central truth of God's kingdom, you know? Not "God has forgiven your sins" or "you have a home in heaven when you die." Those things are wonderfully true, but they're not the Big Idea, the Main Thing. The Main Thing, the One Thing to get straight about the Kingdom of God is that it means that God is here. Though Creation has been broken, though human beings are so twisted that we're sometimes barely recognizable as God's Creation at all, though we do terrible things to each other and sometimes suffer seemingly random catastrophe, God is here. He still rules, and his reign has broken in to the world: first through Jesus and the Holy Spirit, and then through people who recognize his Kingdom for what it is and start to live it out. As we live out compassion, justice, holiness, forgiveness, and redemption, the light of his rule begins to dawn and the shadows of sin and evil start to recede.

Follow your Creator in seeing the misery of his people, hearing their cries, and going to them in their suffering. Resist the urge to hold the suffering at arm's length. God doesn't. He holds the suffering in his arms and gives everything for them.

I invite you to join me in giving to Healing Hands International to help in the relief effort:
http://www.hhi.org/ or some other proven agency that helps in times of crisis!

"The God Who Sees and Cares" by Patrick D. Odum is licensed under a Creative Commons License. Heartlight encourages you to share this material with others in church bulletins, personal emails, and other non-commercial uses. Please see our Usage Guidelines for more information.