The Problem with Commitments

Can you finish what you start? 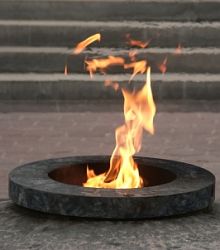 by Rubel Shelly (01/22/2009) | Leading in Hope
City officials in Bullhead City, Arizona, are in hot water with that town's military veterans over an "eternal" flame. The question seems to be whether to make the flame "eternal" or only "occasional." And I am sensitive to both sides here. On the one side is the principle of honor where honor is due; on the other is the matter of fiscal responsibility in these challenging days. Here's the story, according to the Mohave Valley Daily News of January 10, 2009.

With great fanfare last Veterans Day, the flame was ignited for the Medal of Honor Memorial at the Arizona Veterans Memorial Park. An agreement between Bullhead City and Veterans United — a veterans group that had worked to design, build, and pay for the memorial — called for the city to maintain the park and the new memorial. The perpetual flame was one of the most distinctive features.

But last week the eternal flame sat cold and dark. The first month's gas bill for $961.17 had come to the city in December. After deciding to leave the eternal flame on through the holidays, it was turned off last Monday as a cost-cutting measure. The city manager explained that the perpetual flame might have to be only an occasional flame — set ablaze only for special events such as Veterans Day, the Fourth of July, and Memorial Day. The uproar began.

"It's an 'eternal' flame," said one spokesman for Veterans United. "That's just not proper." Said another: "You just don't shut off a 'perpetual' flame!"

"But at this point," said the city manager, "we don't have any money budgeted, you know, a thousand dollars a month, to pay for that eternal flame." Said the mayor: "You know, under the present financial circumstances, we're very careful on how we're spending our money."

So now they're negotiating. Veterans insist figures for the gas expense were projected in discussions all along. At least one city official says he didn't think the city understood they had to pay the gas bill. I hope they work it out satisfactorily. City officials in Bullhead City, Arizona, are in hot water with that town's military veterans over an "eternal" flame.

So now they're negotiating.
When I read the story, I thought immediately of a dozen — no, a "bazillion" — other situations that parallel it. Businesses have cranked up without a workable business plan or adequate capitalization. Crazy-in-love kids have gotten married with no clue of what adult responsibilities for work, education, mortgage, auto insurance, and the like would entail — much less kids of their own. People have made emotional decisions to get baptized or to commit to a missions project and were not ready to live up to the commitment.

It was Jesus who gave this counsel to some who were thinking about joining his band of disciples: "Don't begin until you first count the cost" (Luke 14:25-33, my summary of his words).

As the perpetual-versus-occasional flame illustrates, it is sound advice. It spares embarrassment later. It keeps a good thing from becoming a failed one.

"The Problem with Commitments" by Rubel Shelly is licensed under a Creative Commons License. Heartlight encourages you to share this material with others in church bulletins, personal emails, and other non-commercial uses. Please see our Usage Guidelines for more information.