The Smell of Sheep 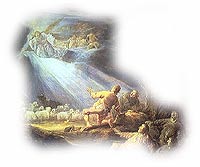 by Phil Ware (12/22/2008) | Two Minute Meditations
In December of 2006, just off highway 36, in Brazoria, Texas, someone stole baby Jesus and His manger. Well, it wasn't exactly the real Jesus; it was the figurine of Jesus from the town's nativity scene. It was stolen and everyone in town was depressed about it. So when they set up the nativity display in 2007, there was no baby Jesus or manger.

The folks in Brazoria aren't alone. The problem is called the "Stolen Baby Jesus Syndrome"! It happens every year. Baby Jesus is stolen out of nativity sets all around the country. In fact, stories about the disappearance of baby Jesus are found in newspapers and local TV news all around the world. Inevitably, the person reporting this story will say something like, "Who would do such a thing?"

This Christmas, we have much bigger problems than a plastic baby Jesus figurine being stolen out of a fake manger in a public nativity display. And if we are honest with ourselves, the real Jesus is also frequently hijacked out of our Christmas experience for many reasons. Sometimes it's our own stress, travel, and preparations for the holidays that rob us of Jesus. Sometimes it's the pressure of political correctness that removes Jesus out of the season and replaces Him with snowmen, reindeer, and holly. Sometimes, it's the hype, posturing, and rudeness of so-called Christian folks who steal Jesus away from the holiday season. That's why God included shepherds in the story (Luke 2:8-20).

Shepherds once enjoyed "most favored status" in the stories of Scripture. Great heroes of the faith - Abraham, Moses, and David — were shepherds. One of the most loved psalms speaks of God as a shepherd (Psalm 23). By the time Jesus was born, however, shepherds had suffered several centuries of bad PR. They were poor. They lived outdoors. They were not refined. They were not educated. Worst of all, they smelled like sheep. The technical term used in Jesus' day to describe shepherds and other less than acceptable people was "'am haaretz" — meaning "common folks," or "people of the land." Let me assure you, being classified "'am haaretz" was no compliment in Jesus day.

Yet when God chose for angels to announce Jesus' birth, God sent His angels to shepherds who were out in the fields tending their sheep! Think of it: dirty, stinky, shepherds camping out and watching their sheep heard the joyous praise of angels and came running to see the newborn baby Jesus. Not many hospitals would have allowed them into the waiting room, much less the delivery room. But God made sure that the shepherds felt at home when they found baby Jesus. He was lying in a feed trough in the place where animals were kept — a place any ol' shepherd would feel at home.

So right in the middle of the birth of the Son of God, with all the good sweet folks praying for God's deliverance and with the Romans busy ruling the empire and with the religious folks trying to protect their traditions, God placed His Son in a manger surrounded by a bunch of wool chasing, tick picking, social cast offs known as shepherds. The smell of sheep and the smoke of their campfires still clung heavily to their clothes when they arrived to greet the newborn King.

The story of the shepherds is God's reminder that no one can steal His grace from us. No matter where we've been or how we smell or what people call us, there's room at the manger with baby Jesus, for all of us.

That's why I think I love the story about the stolen baby Jesus in Brazoria. After a big wind blew down much of the nativity scene Sunday morning December 16, 2007, some folks showed up after church to put the nativity display back together. Guess what they found? Yep, baby Jesus was back where he belonged. Jesus had been returned to the manger. Joseph and Mary were once again surrounded by animals and shepherds as they bowed before their King.

For me, this is God's little reminder that all are welcome to His gift of grace. We are welcome at this manger. Even if we stink with the odor of our bad choices and bad reputations, we are still welcome. And if we are willing, the Wind of heaven can blow through the destruction of our lives and bring Jesus back to us again.

An angel of the Lord appeared to them, and the glory of the Lord shone around them, and they were terrified. But the angel said to them, "Do not be afraid. I bring you good news of great joy that will be for all the people. Today in the town of David a Savior has been born to you; he is the Messiah, the Lord. This will be a sign to you: You will find a baby wrapped in cloths and lying in a manger" (Luke 2:9-12 TNIV).

What does the presence of the shepherds in the story of Jesus' birth say to you?

What group of folks in the story of Jesus' birth most closely characterizes you?

Why do you think Luke mentions shepherds and Matthew mentions the Magi in their accounts of Jesus' early years?

Does it make any difference to your answer to know that Shepherds were considered "stinky hicks" that no one wanted around and Magi were foreigners who practiced a false religion?

How can we steal the real Jesus from the story of His life and substitute our own version of Jesus?

What could you point to in Jesus' birth, and also His life, that would help you answer a person who said, "I'm not sure I'd fit with Jesus, I'm not very religious?"

What do you think Jesus would say to these folks?

What Scriptures could you point to that would help you speak about God's true love for them?

I'd love to hear your response to these ideas on my blog:
http://www.heartlight.org/thephilfiles/2008/12/21/shepherdsshepherds

"The Smell of Sheep" by Phil Ware is licensed under a Creative Commons License. Heartlight encourages you to share this material with others in church bulletins, personal emails, and other non-commercial uses. Please see our Usage Guidelines for more information.