So what did all those men do? 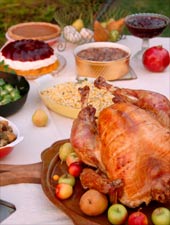 When the hour had come, He sat down, and the twelve apostles with Him. Then He said to them, "With fervent desire I have desired to eat this Passover with you before I suffer; for I say to you, I will no longer eat of it until it is fulfilled in the kingdom of God" (Luke 22:14-16 NKJV).

Last year, the Thanksgiving I envisioned didn't happen. I thought our family in Virginia would be joining the rest of the family in North Carolina and we would celebrate the many blessings we have been given gathered around an assortment of creatively arranged tables.

The first crimp in my plan came a week before the big day, when my oldest daughter, Maddie, told us she wouldn't be able to join us because of work. This would be the first Thanksgiving in her twenty-year existence we would be apart. I tried not to whine. I told myself I would be the conduit for hugs and kisses and "I love yous" between Maddie and the extended family.

(It's likely in the next few paragraphs that the family connections will become confusing. Don't worry about trying to sort who belongs where — it's not really important.)

We regrouped and our smaller family unit made the southward trek. Thanksgiving morning barely dawned before my mother-in-law (and chief chef, I might add) called to say a bug of some sort had squashed her. We should pick up the food and make dinner at my brother-in-law's house.

We sent her our get-well wishes, retrieved the food, and reassigned cooking tasks, determined to gather. But it was not to be — for some of us. The aunt of my sister-in law, Tara, called to say Tara's 91-year-old grandmother, "Nan," had been taken to an Intensive Care Unit. She had serious stomach pain. This branch of Tara's family lives three hours away in South Carolina. Tara hated to bail on everyone, but she had to go. My husband Sam said I should go with Tara so she wasn't alone on the road on Thanksgiving Day.

That left no adult females to do any cooking. The men said they would manage.

So on Thanksgiving Day, I found myself traveling away from my family to a hospital toward people I didn't know. While we traveled south, Tara's Aunt Debbie called to invite us to "Somebodys'" house for the holiday meal. I felt hesitant. Tara didn't really know the "Somebodys." We visited Nan who was weak but stable. She was incredibly happy and thankful to see Tara (and even me who she had never met). I was so glad we made the trip.

This I must ponder.
Afterwards Tara and I and our growing appetites tossed aside our hesitations and agreed to join Debbie and her husband, Gary, for the Thanksgiving meal. They picked us up from the hospital and riding to who knows where, I had to smile thinking of a quip that had come to my mind: "If you want to make God laugh, tell him your plans." I wouldn't be feasting with my family, but instead with my sister-in-law's aunt's daughter's husband's parents and their family and friends.

It wasn't until we were seated around the table (I'm slow sometimes) giving thanks and breaking bread that it hit me — they are my family. We are connected not only through Tara, but more importantly through Christ and the acceptance of His sacrifice.

One day we will know what it really means to celebrate as Christ's family. We will gather around the table and take part in the breaking of the bread with Him and we will all feel at home. We won't have to "skooch" tables together or worry about intruding or about who's working or who is ill. It will be perfect.

As for this past holiday, I place it in my "most memorable times" file I keep in my heart. I thank Patty and Norm, the "Somebodies" for the hospitality and friendliness they and their family extended to me. I send fifteen-month-old Charlie a big "monster face."

You may be asking: what happened with the meal in North Carolina? The men made the women look obsolete. Hmmm. This I must ponder.

"Family Connection" by Lisa Mikitarian is licensed under a Creative Commons License. Heartlight encourages you to share this material with others in church bulletins, personal emails, and other non-commercial uses. Please see our Usage Guidelines for more information.