What can you do to show it? 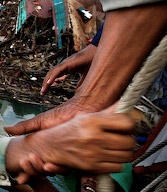 by Alan Smith (11/18/2008) | Timely Truths
Doug Nichols went to India to be a missionary, but while he was just starting to study the language he became infected with tuberculosis and had to be put in a sanitarium. It was not a very good place to be. It was not very clean and conditions were difficult because there were so many sick people there. But Doug decided to do the best he could in that situation. So he took a bunch of Christian books and tracts and tried to share the gospel with the other patients in the sanitarium.

But when he tried to pass out tracts, no one wanted them. He tried to hand out books, but no one would take them. He tried to talk with them, but he was handicapped because of his inability to communicate in their language, and he felt so discouraged. There he was. Because of his illness he would be there a long time. But it seemed like the work that he had been sent to do would not be done because no one would listen to him.

Because of his tuberculosis, every night at about 2 o'clock he would wake up with chronic coughing that wouldn't quit. Then one night when he awoke he noticed across the aisle an old man trying to get out of bed. He said the man would roll himself up into a little ball and teeter back and forth trying to get up the momentum to get up and stand on his feet. But he just couldn't do it. He was too weak. Finally, after several attempts the old man laid back and wept.

The next morning Doug understood why the man was weeping. He was trying to get up to go to the bathroom and didn't have enough strength to do that. So his bed was a mess and there was a smell in the air. The other patients made fun of the old man. The nurses came to clean up his bed and they weren't kind to him, either. In fact, one of them even slapped him in the face. Doug said that the old man just laid there and cried.

Doug said, "That next night about 2 o'clock I started coughing again. I looked across the way and there was the old man trying to get out of bed once more. I really didn't want to do it, but somehow I managed to get up and I walked across the aisle and I helped the old man stand up. But he was too weak to walk."

Doug said, "I took him in my arms and carried him like a baby. He was so light that it wasn't a difficult task. I took him into the bathroom, which was nothing more than a dirty hole in the floor, and I stood behind him and cradled him in my arms as he took care of himself. Then I carried him back to his bed and laid him down. As I turned to leave he reached up and grabbed my face and pulled me close and kissed me on the cheek and said what I think was 'Thank you.'"

Doug said, "The next morning there were patients waiting when I awoke and they asked if they could read some of the books and tracts that I had brought. Others had questions about the God I worshiped and His only begotten Son who came into the world to die for their sins." In the next few weeks Doug Nichols gave out all the literature that he had brought, and many of the doctors and nurses and patients in that sanitarium came to know Jesus Christ, too.

He said, "Now what did I do? I didn't preach a sermon. I couldn't even communicate in their language. I didn't have a great lesson to teach them. I didn't have wonderful things to offer. All I did was take an old man to the bathroom and anyone can do that."

"Anyone can do that!"

Beloved, let us love one another, for love is of God; and everyone who loves is born of God and knows God. He who does not love does not know God, for God is love (1 John 4:7-8 NKJV).

What can you do to express the love of God to people around you today?

"Showing God's Love" by Alan Smith is licensed under a Creative Commons License. Heartlight encourages you to share this material with others in church bulletins, personal emails, and other non-commercial uses. Please see our Usage Guidelines for more information.