How do grandparents deal with multiple multiples? 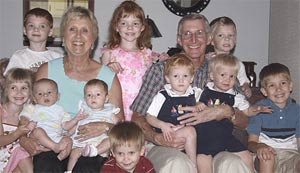 by Janet Colbrunn (05/29/2008) | Together in His Grace
As a young mother, I prayed for twins. Who would have guessed that in time, my prayer would be answered with multiple multiples for grandchildren! Excerpts from our Christmas letters tell the story best.

To our family and friends at Christmas 2001:

This has been a busy year for Donn and me. First, Christy was married to Chris in September with our only grandson, Boyd, as a darling ring bearer. Interestingly enough, most of the women in the wedding party were pregnant including our two daughters-in-law, Joni and Deb. By October, we advanced from having one grandchild to a whopping five! Robb and Joni bore their second child, Lilia, not long after Shonn and Deb gave birth to triplets, Bethany, Kent and Nathan, at 32.5 weeks. The triplets were very healthy for preemies and came home in about a week. We have been providing full-time, live-in nanny services every other week since then. The job is exhausting and exhilarating and we expect that the overwhelming need will continue well into next year.

To our family and friends at Christmas 2005:

We traveled 700 miles in November to be with Christy and Chris when their twin boys, Garrett and Brock, were born at 37 weeks. Our son, Shonn, insisted that we were over-qualified to help with just twins. Although they came home immediately from the hospital, both refused to breastfeed. They required the persistent help of a lactation consultant before they were able to nurse full time. Therefore, extra help was needed to keep up with the supplemental bottle feedings while Christy recovered from childbirth. Five weeks later, Christy felt confident that she could handle the twin care and the house on her own and we returned home to spend Christmas with the other 6 grandchildren. In case you lost count, Robb and Joni have another child, Gabe. One day he will appreciate having these two new buddies to play with at future Christmas gatherings.

To our family and friends at Christmas 2007:

Just when we thought that having 8 healthy grandchildren was a blessing indeed, Robb and Joni

announced that they would be having twins. The cry for help came early with this set of twins since Joni has had difficult first trimesters with her other children. With double the hormones, her stomach would not tolerate anything by mouth for eight weeks. She was confined to bed and required a port in her arm for fluids, nutrition and medication. We moved in with them for much of that time to assist her and to care for their three children. Her condition continued to improve until Adalai and Troy were born at 36 weeks. Their baby girl came home with Mom while her brother remained for another week until his lungs matured. This experienced mother of five rallied back to caring for her family single-handedly within a month.

At a time when some parents contend with having their adult children moving in with them again, we found ourselves moving in with our children temporarily. Whether the need is money, medical or multiples, we found that it was a good idea to develop guidelines to help things run smoothly when intensive grandparent care becomes necessary.

We were blessed with the opportunity to bond!

As we reflect on our time of helping, we realize that we were blessed with the opportunity to bond with our grandchildren and children in the process. In addition, we have grown closer as a family since we have all been able to share the unique multiples experience. How many families would qualify to hold a family reunion at the Twinsburg Twin Festival?

"When the New Babies Require Extra Care" by Janet Colbrunn is licensed under a Creative Commons License. Heartlight encourages you to share this material with others in church bulletins, personal emails, and other non-commercial uses. Please see our Usage Guidelines for more information.

Janet Colbrunn is a licensed professional counselor and also the author of Ideas for Writing Creative Christmas Letters That People Are Actually Eager to Read! and the grandmother of multiple multiples! Email Janet (Visit the Author's Website)