What's buried in the concrete of your heart? 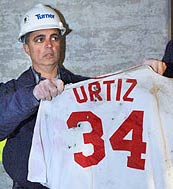 The brand new Yankee Stadium, currently under construction in the Bronx, is a multi-million dollar project. With deadlines looming and costs mounting, you know that it would take a serious problem for workers to show up on a weekend to jackhammer newly-poured concrete. However, that's exactly what happened on April 13th. Workers showed up to break apart two-and-a-half feet of concrete on what will eventually be a concourse.

Structural problems? Not really. More like sabotage. By terrorists? Well, that would depend on who you ask, I suppose. The culprit, actually, is a construction worker from the Bronx named Gino Castignoli, who only worked one day on the project. But, that one day could have had serious consequences for the Yankees franchise, its fans, and the entire city of New York. Yankees president Randy Levine called Castignoli's offense a "bad, dastardly act," and the Yankees are discussing with the District Attorney the possibility of bringing charges against him.

No, he didn't use sub-standard material, or rig the part of the stadium he worked on to collapse.

He buried a David Ortiz Boston Red Sox jersey in the concrete he laid.

The Red Sox and Yankees are, of course, divisional rivals. Their animosity goes back at least as far as 1918, when the Sox traded a young pitcher named Babe Ruth to the Yankees. The trade, so the legend goes, cursed the Red Sox, who didn't win another World Series until 2004. The two teams' — and their fans' — hatred of each other is arguably the most intense in sports. Rarely does a season go by in which at least one Yankees — Red Sox game isn't interrupted by a brawl. Castignoli, a Red Sox fan who literally lives in the Yankees' neighborhood, apparently hoped that burying the jersey in the stadium would "curse" the Yankees' new home.

Two other workers — Yankee loyalists, I guess — ratted Castignoli out.

It's a measure of how seriously the Yankees take the rivalry that they would take the time and expense to dig the jersey out. I mean, what, a couple of square feet of polyester and cotton twill? What harm could it possibly do to a gigantic concrete and steel stadium? Still, the Yankees preferred to take no chances, and out came the jackhammers. Best to dig it out now so there's no chance of regretting it later.

Maybe that's a good attitude for us all to adopt toward the stuff that we might have buried in our lives where it doesn't belong.

"Sin" is the term that the Bible uses for that kind of thing. It really seems like sort of an old-fashioned word, doesn't it — more appropriate for the "black or white" revival circuit than for life in today's more complicated, "shades-of-grey" world? We prefer to speak of "mistakes" or "weaknesses" or "character flaws" or "addictions," and those terms can all be helpful. The problem is that those are usually after-the-fact words that we use for the stuff that we might have had buried in our lives for a long, long time, before they come to light. I mean, we usually live with anger management problems for years before a broken marriage or family or friendship forces us to speak of the problem. Lust can lie buried beneath layers of respectability for a long time before adultery or other sexual immorality exposes it. Selfishness and greed can stay undisturbed for much of our lives, and leave us absolutely puzzled about why giving doesn't bring us any joy or why what we attain is never enough to satisfy us.

Genesis says that long before Cain raised his hand against his brother Abel, sin was "crouching at [his] door." His jealousy, his anger, and his callous disregard for his own "flesh and blood" lay buried and untouched deep in his heart before it came spewing out in homicidal rage. Like most of us will do if left to ourselves, Cain tried to shift the blame for his actions; he wasn't treated fairly, God didn't appreciate him, and so on and so on. Not so different, really, from the layers of blame and bitterness that cover our own sins.

We have to be honest about the sin that still lurks in our hearts.

So we walk around angry, faces downcast, so focused on our hurt or anger or disappointment that we fail to deal with the real problem: down deep in our hearts lurks sin, waiting, biding its time, a curse waiting to happen.

The good news, of course, is that it doesn't have to be that way.

The gospel proclaims that we have a Father in heaven who loves us, who sent his Son to die for our sins, and raised him to pour out his Spirit into our lives and hearts. "His divine power has given us everything we need for a godly life through our knowledge of him who called us by his own glory and goodness ..." That's the overwhelming claim the apostle Peter makes in reflecting back on Jesus' life and work (2 Peter 1:3-4).

Peter goes on to say that through Jesus, God "has given us his very great and precious promises, so that through them you may participate in the divine nature, having escaped the corruption in the world caused by evil desires." In short, Peter reminds us that in Christ God has given us the awareness and the power to do some excavation: the integrity to be honest about what is buried in our hearts and the tools to dig it out. "Make every effort to confirm your calling and election sure ..." he exhorts us (2 Peter 1:10), reminding us that while God supplies the energy and the opportunity for us to confront the sin in our lives, it's up to us to be willing to make the hard choices and do the difficult excavation that God's calling demands of us.

Among other things, that means that we have to be honest about the sin that still lurks in our hearts and crouches at our doorstep. Our churches must be places where confession is encouraged and repentance truly celebrated. We must have relationships of mutual accountability in which hypocrisy is exposed and we call each other to godliness and righteousness. And we must always be willing to let the jackhammer of the gospel chip away at our pride, arrogance, and pretense so that God can get at the sin that still lies underneath. In Christ, the curse is counteracted. But, it won't make a bit of difference if we can't let the sin buried in our hearts be exposed to his light and life and healing.

Take a deep breath. Time for some excavation.

"Excavation" by Patrick D. Odum is licensed under a Creative Commons License. Heartlight encourages you to share this material with others in church bulletins, personal emails, and other non-commercial uses. Please see our Usage Guidelines for more information.