What do you mean my dog is on the roof? 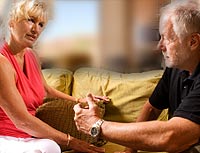 by Rubel Shelly (04/29/2008) | Leading in Hope
My wife tells me I'm seriously deficient in the tact department. I tend to be direct, clear, and forthright. (Those are my terms.) She thinks I am inclined to err on the side of being a bit abrupt and blunt. (At least, she fears that my candid manner can be perceived in those negative ways.)

Even so, I don't think I'm quite as bad as one fellow I heard about. When Fred went to Europe, he left his beloved dog with his brother Ed. Three days into his trip, Fred called back to check on things.

"He's dead!" replied Ed. No nonsense. Straight to the point.

"What?" screamed Fred. "You can't just hit somebody with news like that! You have to ease your way into it. Lay some groundwork for it. Use some tact."

"Explain what you mean," said his brother.

"Maybe you could have said something about Old Fido being up on the roof. You reassure me you have it under control and that everything is going to be fine. When I call the next day, maybe you could say he jumped off and broke his leg, but the vet said he would make a complete recovery. He's just going to have to spend a few days at the clinic," he explained. Are you following me?"

"Okay," Fred continued. "When I call back the next day, you could say there were complications and that my dog had died. That way it wouldn't be such a blow. That way you could have gotten me ready for bad news. Understand?"

Some news is hard to receive or to communicate. Some facts are simply unpleasant. And all of us need a couple of friends who care enough about us to be really and truly honest with us – and to hold us accountable. Like Fred, though, all of us would appreciate a modicum of tact and gentleness thrown in.

If you're struggling today with unpleasant or painful truth that needs to be shared, you are not doing anyone a favor by avoiding the task. But think before you speak. Don't use a cover such as "brutal honesty" to mask what everyone else will see as "honest brutality." No swatting the fly on a friend's forehead with a meat cleaver! Think and pray before you speak. Then speak with gentleness.

Solomon had it right: "Wounds from a friend can be trusted, but an enemy multiplies kisses" (Proverbs 27:6 NIV). Nobody benefits from false flattery. Being a "yes man" (or woman) to a person who needs accountability and loving criticism is a sophistry that will come back to haunt you.

Be kind and have the right motive. But care enough to speak the truth.

Therefore, as God's chosen people, holy and dearly loved, clothe yourselves with compassion, kindness, humility, gentleness and patience. Bear with each other and forgive whatever grievances you may have against one another. Forgive as the Lord forgave you. And over all these virtues put on love, which binds them all together in perfect unity (Colossians 3:12-14 TNIV).

"A Tact Attack" by Rubel Shelly is licensed under a Creative Commons License. Heartlight encourages you to share this material with others in church bulletins, personal emails, and other non-commercial uses. Please see our Usage Guidelines for more information.