How long has it been since you tried to do it again? 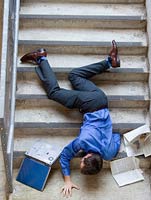 by Mike Barres (02/09/2008) | Just for Men
You are going to think I’m making this up, but it is a true story. When my wife was pregnant with our first child, she had quite a bit of "morning sickness." One morning she was sick and asked if I could make her pancakes. I don’t cook. I reminded her of that. She said that cooking pancakes was really simple. She told me that she already had the batter made in the refrigerator. She told me to just turn on the stove, spray the pan with that cooking spray stuff, and flip the pancakes with the plastic spatula thing. I agreed to give it a try.

Next thing you know, smoke was filling our little apartment. The smoke alarm was going off. I turned on the stove vent and opened a window. She called out from the bedroom, "Is everything ok?" I told her that it was ok, I had just turned up the heat a little too high.

Needless to say, she never asked me to cook again. She is a really good cook. I choose to let her function in her gifting.

This morning, she had to leave the house early. She told me, "There is some pancake batter made, if you want to make some pancakes." I said, "Do you remember what happened the last time I tried to cook pancakes?" We both had a laugh. Just to give you some perspective, my pancake burning incident was 28 years ago, and by the way, our daughter turned out just fine, in spite of the plastic while pregnant diet.

My wife left and I went to the kitchen. I thought, "I can do this." So I got out the pan and the spray and a plastic spatula. I heated up the stove and poured out the batter. I’m happy to report that the pancakes turned out really well, even though I did leave them unattended for a few minutes while I went and checked my email in another room.

Sometimes we mess up in life and are afraid to try again. It may be a task, or it may be a job, or relationships. Failure is not final. Learn from your mistakes and move on.

Sometimes we mess up in life and are afraid to try again.
"For God has not given us a spirit of fear, but of power and of love and of a sound mind" (2 Timothy 1:7).

"Don't Let Failure Be Final" by Mike Barres is licensed under a Creative Commons License. Heartlight encourages you to share this material with others in church bulletins, personal emails, and other non-commercial uses. Please see our Usage Guidelines for more information.