So is our human nature really all that bad? 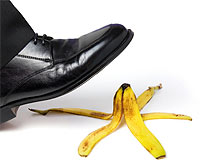 by Russ Lawson (01/24/2008) | Special Features
Often in my writings I refer to "human nature" or "our human tendencies" in some form or another. Often that "nature" is presented as a weakness or a bad thing. But is it really bad?

Stop and think about what human nature really is all about. God created us. He made us what we are, with the abilities we have. Is that really a bad thing? Can human nature be inherently bad when God said that he created human beings in his image? (Notice how clearly the Bible declares this truth both before and after the Fall!)

Then God said, "Let Us make man in Our image, according to Our likeness; and let them rule over the fish of the sea and over the birds of the sky and over the cattle and over all the earth, and over every creeping thing that creeps on the earth" (Genesis 1:26-27 NASB).

This is the book of the generations of Adam. In the day when God created man, He made him in the likeness of God. He created them male and female, and He blessed them and named them Man in the day when they were created (Genesis 5:1-2).

For You formed my inward parts; You wove me in my mother's womb. I will give thanks to You, for I am fearfully and wonderfully made; Wonderful are Your works, and my soul knows it very well (Psalm 139:13-14).

With it we bless our Lord and Father, and with it we curse men, who have been made in the likeness of God; from the same mouth come both blessing and cursing. My brethren, these things ought not to be this way (James 3:9-10).

Our human nature often opens the door for us to be involved in sin doesn't it? It sometimes allows us to put ourselves in the path of temptation even when we know better. Unfortunately we say, "Well, that is just human nature." But that's not the "human nature" God made in His image. That is what the Bible calls "the flesh" (Romans 7:21-25).

Let me suggest to you that "human nature" as God intended it is not a bad thing! Human nature is the God given power to make choices. That is part of that which makes us in "the image of God." We are not robots; God wants us to think and make choices and come to him and love him because we choose to, not because we are forced to or don't know any better.

Some choices are good, some are not. One of my favorite scenes from the movie "Indiana Jones and the Last Crusade" is the place where he finally enters the room where the Holy Grail, the "cup of Christ" (as defined in the movie), is located. The bad guy forces his way in and is given a cup which his assistant thinks is the real thing. He drinks from it and shrivels up and dies. The old Knight Protector (who is there) observed, "He chose poorly." Then, "Indy" chooses a simple old battered cup and drinks: he survives and the old protector says, "You have chosen wisely."

From the beginning of time humankind has made poor choices. Eve chose to believe a lie and eat of the tree of the Knowledge of Good and Evil, followed by Adam who also chose to ignore God's commandment and eat (Genesis 3:1-15).

We may at times think that life would be easier if we just weren't presented with so many choices. God, however, had more faith in us than perhaps we do ourselves. He still believes in us and desires that we make the right choices. If you wonder what he thinks about us and our choices, notice what the apostle Peter has to say:

The Lord is not slack concerning His promise, as some count slackness, but is longsuffering toward us, not willing that any should perish but that all should come to repentance (2 Peter 3:9).

We must not live in the poor choices of the past!
We can choose to leave the past and come to repentance. Look at how Paul describes how the Corinthians had left their bad choices and their bad past behind:

Or do you not know that the unrighteous will not inherit the kingdom of God? Do not be deceived; neither fornicators, nor idolaters, nor adulterers, nor effeminate, nor homosexuals, nor thieves, nor the covetous, nor drunkards, nor revilers, nor swindlers, will inherit the kingdom of God. Such were some of you; but you were washed, but you were sanctified, but you were justified in the name of the Lord Jesus Christ and in the Spirit of our God (1 Corinthians 6:9-11).

Our challenge is to not let the "flesh" dominate our choices. Then, even if we have chosen poorly, we must not let ourselves live in the past — in the sin that we chose. Just as our "human nature" allows us to choose poorly, it also allows us to choose wisely — to choose Jesus, to choose repentance, to choose to live as those created in the image of God.

Human Nature! We all have it: the challenge is to choose wisely!

"Human Nature?" by Russ Lawson is licensed under a Creative Commons License. Heartlight encourages you to share this material with others in church bulletins, personal emails, and other non-commercial uses. Please see our Usage Guidelines for more information.