Losing the Hidden Weight in 2014

What are you carrying around unnecessarily in your hidden weight?

I know, it's resolution time. As the Yew Year begins, I am choosing to lose some weight — not body weight, as important as that is, I am going to lose some burdens. I refuse to take back what God has taken.

You can't miss the headlines:

This one especially caught my eye:

In my lifetime, dieting has become a billion dollar industry. We have hundreds of options to choose from. If the diets don't work, we now have surgical options: Gastric Bypass or Gastric Band (Lap-Band®) and more. Regardless of the options or how much we have lost in the past, most of us still continue to carry around too many extra pounds. In the long run, we suffer the consequences. I know this first hand.

Those extra pounds of fat we have accumulated are not the only things we carry that weigh us down. There is another weight we carry just below the surface, hidden in the corners of our minds. We call them burdens, regrets, worries, grudges, and resentments. These are weights that have been hidden and carried for years. There is no diet for these hidden pounds. They require a spiritual scalpel.

Long ago the Gentle Healer said:

Come to me, all you who are weary and burdened, and I will give you rest. Take my yoke upon you and learn from me, for I am gentle and humble in heart, and you will find rest for your souls. For my yoke is easy and my burden is light (Matthew 11:28-30).

Later, Paul urged the believers in Galatia to remember something very important:

It is for freedom that Christ has set us free. Stand firm, then, and do not let yourselves be burdened again by a yoke of slavery (Galatians 5:1).

Jesus takes the burdens, so why do we continue to carry them around? Faith tells us that we are free of our burdens, but just like we do with weight loss, we have a tendency to reclaim what we've lost.

Turn it loose for good!

After fifty-eight years of life, Bill was living his last days in hospice care. His cancer had reached an untreatable level, and even though the doctors were able to help his pain, he was still having a difficult time. Bill's body was rebelling, robbing him of the blessing of dying peacefully. Something inside him was keeping him alive.

The chaplain took the son aside and explained:

The doctors are doing everything they can to ease your dad's pain. But, I believe your dad has some unfinished business, some long hidden burden that is keeping him alive. Are you aware of any problem in the past that could be bothering him?

"Yes, I know what's wrong," replied the son. "I am not my father's only child. A number of years ago when my sister was in high school, she decided to get married. She had fallen in love with a boy of a different race and when she announced her intentions to marry, my dad hit the roof. He told her that if she married that guy, she'd never be welcome in the house again. She would be disowned. My sister married the guy and my dad kept his word. Even though she lives less than an hour away, he never talked of her again."

Do it now!
"If you know how to contact her, get her here as soon as possible," the chaplain requested.

Later that evening, the young woman who had been disowned thirteen years earlier nervously waited in the lobby. Beside her was young Billy, a four-year-old grandson Bill had never seen. After the chaplain explained Bill's condition, the four of them — the chaplain and Bill's son, daughter and grandson—entered Bill's room together. 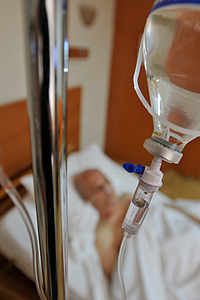 Although Bill was confined to the bed by tubes and wires, he was alert enough to recognize his daughter. She was his burden, his unfinished business. When she reached the bedside he looked up at her with tears in his eye and said in a gentle, hopeful whisper, "I'm so sorry, I love you!"

Her only response was, "I know!"

With tears all around, they hugged as though they would never hug again. For hours that night, they talked about old times, catching up on life, and soaking in the moment. They took pictures, lots of them.

Then with everyone gathered around, Bill turned to his son and said, "Thank you for bringing her back."

To his daughter he said, "Thank you for coming."

To his grandson, he said, "You're going to be a good daddy someday." With his final breath, Bill whispered, "I love you all!" and died.

Bill missed years of good times because he wouldn't do what was necessary to turn loose of the past. He robbed himself of the greatest joys of life. Don't make that same mistake. Let go of those burdens, hurts, and worries.

Do it now! Lose it for good. Jesus has blessed you with a "yoke of grace." Do whatever is necessary to turn loose of the regret, the resentment, the grudge, the doubt.

"Losing the Hidden Weight in 2014" by Ron Rose is licensed under a Creative Commons License. Heartlight encourages you to share this material with others in church bulletins, personal emails, and other non-commercial uses. Please see our Usage Guidelines for more information.