How much has your stuff become your owner? 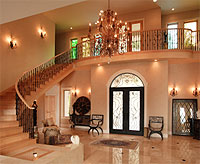 Someone in the crowd said to him, "Teacher, tell my brother to divide the inheritance with me."

Jesus replied, "Man, who appointed me a judge or an arbiter between you?" Then he said to them, "Watch out! Be on your guard against all kinds of greed; life does not consist in an abundance of possessions."

Police in Seoul, South Korea are busy looking for a woman who is suspected of embezzling $1.4 million from the agricultural cooperative where she works. The 26-year-old woman apparently has spent the last few years siphoning utility and tax payments into a personal account. Part of what tipped police off to what she was doing was her lavish lifestyle: a spokesman said, "We have strong reason to believe she used this money to purchase about 1,000 designer goods." Her purchases apparently included hundreds of pairs of shoes, among other items.

The police have even coined a term to describe the alleged culprit: "luxury addict."

I think it's probably a good word. The Bible calls it "greed," but "luxury addict" seems to capture the idea pretty well. This woman's "luxury addiction" drove her to steal huge sums of money that her workplace was sure to miss. It's driven her into hiding from the police. It's also driven her to buy ridiculous amounts of expensive merchandise. It makes you kind of wonder, doesn't it, what's missing in her life that she thought all that stuff would fill?

Aren't you glad that you never did anything ridiculous or extreme for the sake of more stuff?

Luxury addict! Looking around at the society we've built for ourselves, I almost want to ask, "Who isn't?"

For sure, not many of us have stolen $1.4 million to fund our lifestyles, but I wonder how many of us have occasionally cut some ethical corners to get what we want? Few of us have hundreds of pairs of shoes, but I imagine most of us are running out of storage space in our houses. Maybe our luxury addictions don't even take the form of always wanting more stuff. Still, how many of us work ridiculous hours to pay for the stuff we have and the lifestyle we've chosen?

Before you answer back defensively about this, ask yourself how much time and energy you have left for your family, your church, and your community after your workday is over. That will tell you something about the deceitfulness of luxury addiction and its cost.

Maybe that deceitfulness is one of the reasons that some of Jesus' most sober warnings have to do with greed. He knows that greed takes many forms and that it's sometimes hardest to see in ourselves. Greed can take the form of an inordinate concern about getting what we think we deserve. Who would dare call a brother asking for his share of his parents' inheritance greedy? Yet Jesus sees how easily greed can thrive in hearts filled with a concern for possessions and wealth, and he warns us to be on our guard.

"Luxury addiction" can be easily tangled up in legitimate concerns or a proper sense of responsibility, and it's sometimes most difficult to untangle the threads. We tell ourselves that we want our kids to go to the best schools or grow up in the safest neighborhoods — and we probably do want those things. But, that concern can also mask our own desires to live in the places served by those schools or to enjoy the amenities of those safe neighborhoods or the notoriety of living in the right places and having kids in the right schools. We say out loud that we could do without some of our luxuries and comforts, but we rarely manage to do it for long.

Aren't you glad you never did anything ridiculous to get more stuff?
When we hear Jesus say, "Life does not consist in an abundance of possessions," we nod in agreement. We might even write about it. But it's striking, isn't it, the degree to which we define who we are by what we have, where we live, and how much of what we want we can actually buy?

I read recently about a group of ten people in California, activists wrestling with the environmental impact of Americans' lavish lifestyles, who made a pact in 2006 that they would not buy anything new for the entire year. They called this challenge "The Compact," and other than food and essentials like underwear, toiletries, and medications, they went through the entire calendar year without buying anything new. They discovered in doing so how much the public library has to offer. They learned how to repair things. They rediscovered the joy of sharing what they already had with one another. They had the chance to pay down credit card debt. "One of the by-products of 'The Compact' is that I now have a completely different relationship with the things in my life," a 42-year-old man said. "I appreciate the stuff I have more." Another participant reported, "I found that a lot of times there were things I thought I needed that I didn't need that much." All ten have elected to take the experiment into a second year.

We don't like our religion harsh. Christian asceticism isn't chic! But, I seriously doubt that there's any way to escape the gravitational pull of greed without making a similar compact to just stop buying more stuff. I know, that's a drastic and tough step. It's as hard for me to imagine as it may be for you. But if "luxury addiction" is really as big a problem for Americans as I'm making it out to be, then I don't think calls for moderation will suffice.

What better way for us to agree with Jesus' countercultural proclamation that life isn't about having lots of stuff than to choose a lifestyle that holds stuff at arm's length?

Ironically, in going to such lengths and expending such effort to have the things we consider valuable, we're liable to miss out on the priceless treasure God has given us in Jesus and the amazing riches he continues to pour into our lives. We need a new value system. We need a new definition of "rich." It's not about luxury, or money, or possessions. It's about God and grace and generosity and genuine happiness.

Shoes can't touch that. Not even hundreds of pairs.

"Luxury Addiction" by Patrick D. Odum is licensed under a Creative Commons License. Heartlight encourages you to share this material with others in church bulletins, personal emails, and other non-commercial uses. Please see our Usage Guidelines for more information.