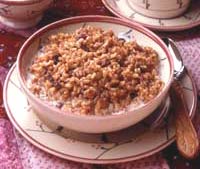 by Larry Zinck (07/26/2005) | Special Features
The Associated Press reported on March 22 that the lower-sugar versions of six major brands of sweetened cereals have no significant nutritional advantages over their full-sugar counterparts.

Nutrition scientists at five universities found that while the new cereals do have less sugar, the calories, carbohydrates, fat, fiber and other nutrients are almost identical to the full-sugar cereals. That's because the cereal makers have replaced sugar with refined carbohydrates to preserve the crunch.

However, as you may have noticed, in order to market the product, the lower-sugar claim is often printed nearly as large as the product's name. Only by carefully comparing the nutrition labels of both versions of a cereal would a shopper know there is little difference between them.

"You're supposed to think it's healthy," said Marion Nestle, a nutrition professor at New York University and author of a book critical of the food industry's influence on public health. "This is about marketing. It is about nothing else. It is not about kids' health."

The new cereals were introduced last year as attention on the nation's obesity epidemic forced food companies to rethink marketing strategies. Sales of reduced-sugar cereals grew by almost 50 percent in 2004.

After one mother of 3 from Concord, New Hampshire, heard the facts she said: "You assume it's healthier by the way it's presented. It's very misleading."

Isn't that the way it works with sin too?

A young woman, age 23, asked to talk with me today. She recently began studying the Bible and has visited our church the past two Sundays. She is single and has two daughters, one age 3 and the other is 4 months old. Each girl has a different father. This young mother told me that she grew up thinking that being sexually involved with a boyfriend was perfectly normal and natural. Now she is happy to have discovered a new way of living. It's not what today's movies and TV shows promote, but following the Lord's teachings is a sure way to avoid much grief and heartache.

I met a missionary recently who was moving back to Texas after spending many years in South America. He suggested that the world's biggest religion is not Islam or Buddhism or Catholicism or Protestantism, but rather materialism. I'm not an expert on how people live all over the world, but I would have to agree that materialism is the biggest "religion" everywhere I have been.

The United States is a Mecca of consumerism. Whatever you might want or could dream of wanting is on the shelf waiting to be purchased. Shrewd advertisers peddle their wares on TV commercials and in slick magazine ads. Usually they tell us that buying their product is the road to happiness and self-fulfillment. It's all very misleading, isn't it?

We need to remember the words of Jesus:

"Be on your guard against all kinds of greed; a man's life does not consist in the abundance of his possessions." (Luke 12:15)

It's all very misleading, isn't it?
We would all do well to follow the example of Moses:

Moses chose to be mistreated along with the people of God rather than to enjoy the pleasures of sin for a short time. He regarded disgrace for the sake of Christ as of greater value than the treasures of Egypt, because he was looking ahead to his reward. (Hebrews 11:25-26)

I could go on, but I think you have the idea. Sin looks so pretty and promises so much, but in the end it's all a lie — like the claims in large print on the cereal box. Let's all stay alert so we won't be misled. Failing to read the nutrition labels on a box of cereal can be bad for your health. The consequences of being misled by the allures of sin are much more drastic!

"Misleading Advertising" by Larry Zinck is licensed under a Creative Commons License. Heartlight encourages you to share this material with others in church bulletins, personal emails, and other non-commercial uses. Please see our Usage Guidelines for more information.

Larry Zinck is a long time minister in the country of Brazil.