Closer Than You Think

How far have you gone to find what you are looking for? 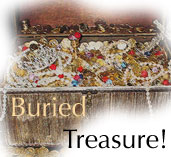 Seek his will in all you do, and he will direct your paths (Proverbs 3:6 NLT).

There is an old story that I have seen in different forms. The essence of the tale is that a devout but very poor rabbi from Krakow had a dream one night. A voice urged him to make a journey to Prague and to look for treasure under the bridge that led to the king's palace. When he woke up the next morning, he remembered his dream. But he did nothing about it. When he had the same dream the next night, he began to grow restless. After having the identical dream for the third night in a row, he awakened and put on his walking shoes.

When the poor rabbi arrived in Prague, he found that the bridge was under guard day and night. But he persisted in going there early every morning and to walk around it until dark. The captain of the guard spotted him and asked if he was looking for something or expecting to rendezvous with someone. The devout teacher told him the story of the dream that had brought him there.

The soldier laughed at the scruffy-looking old man so far from his home. "Because of a silly dream, you old fool, you have merely worn out your shoes from walking!" he roared. "Why, if I were foolish enough to pay attention to dreams, I would have made a trip long ago to Krakow to dig for treasure under the stove in the house of a Jew, someone named Eisek — yes, that was the name, Eisek ben-Yekel. Can you imagine that a man of my position would go on such a wild goose chase!" And he laughed again and shook his head.

With that, the old man bowed to the guard, turned his face toward Krakow, and made his long journey back home. When he arrived there, Rabbi Eisek ben-Yekel dug the ground beneath his very own stove — and unearthed a treasure! How many of us do you suppose have wandered far and wide in search of something that was right under our noses all along?

The treasure you seek may be waiting right where you are!
An inpatient young employee dreams of a secure, rewarding career. An older one wants to be appreciated by a mate or children for hard work and solid achievements. A church member wants more spirituality in the body. What to do?

The treasure you seek may be waiting right where you are! Moping about, having an affair, church-hopping — they are poor and peevish alternatives to creative hard work, healthier personal relationships, and spiritual renewal.

Before wandering off into strange and perhaps dangerous new places, ask God to let you see things where you are more clearly.

"Closer Than You Think" by Rubel Shelly is licensed under a Creative Commons License. Heartlight encourages you to share this material with others in church bulletins, personal emails, and other non-commercial uses. Please see our Usage Guidelines for more information.