What do you do when you can't think of anything else to do to hang on? 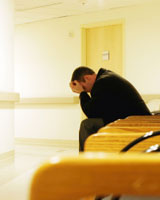 Sing joyfully to the Lord, you righteous;
it is fitting for the upright to praise him (Psalm 33:1 TNIV).

Less than two months after the doctor told him he had cancer, my friend was in the last hours of his life. His body was shutting down. His speech was infrequent and not intelligible. At times, he appeared to have slipped from consciousness. At other times, it was clear that he knew the loved ones in the room with him. The family decided that in his last waking hours they would sing songs of praise to God to sing my friend home to God. After all, he had always loved to sing praises to the Lord.

As they began this time of praise, it became clear my friend was not only aware, but that he was also a part of these songs of praise. As his family and friends sang, he beat the time to the songs with one hand to show that his heart was joining in their praise of God, the God in whom he had put his trust. Even the grip of death could not hold his heart from praise or keep his spirit from singing.

The gift of song is precious. It has sustained Christians under trial and persecution from the earliest days of the church until this very day. The song of faith is resilient. It can stand up under the harshest bombardments, be they emotional, physical, or spiritual. The object of our singing is our Father in heaven; the one who is ever faithful. As the psalmist says:

Celebrate your faith in him!
Long ago, the apostle Paul and his companion Silas, were praying and singing hymns to God at midnight in Philippi. They had been beaten, placed in the inner most place in the jail, and placed in stocks (Acts 16:26). Pain, threat, and persecution could not silence their voices nor interrupt their praise and prayer. They would allow nothing to keep them from singing praises to their God! The result of this faith in the face of threat, persecution, and possible death was the conversion of their jailer and his whole household (Acts 16:29-34). Such is the power of song when immersed in faith in the eternal and faithful God.

So no matter where you are and what you face, remember your God and celebrate your faith in him through song. No matter what has you in its grip, remember that the Father's grip is stronger and that he will carry you home. And to keep you from forgetting, just keep singing!

"Just Keep Singing" by Phil Ware is licensed under a Creative Commons License. Heartlight encourages you to share this material with others in church bulletins, personal emails, and other non-commercial uses. Please see our Usage Guidelines for more information.