Eye of the Tiger

What would it mean for us to live courageously? 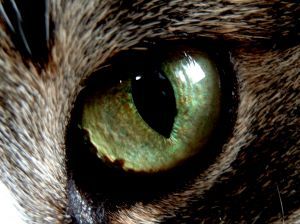 When I think of living courageously — taking risks, being challenged, trying the unknown — a few songs come to mind. One song, well known to Rocky fans at least, is "Eye of the Tiger" by American rock group Survivor. Not that I want to fight when I hear it, but its words move me to show some courage.

In particular, the words that stick out to me are part of the chorus: "Risin' up, straight to the top, have the guts, got the glory." When I think of going far in life, I think of "getting the glory." But to do that, we have to "have the guts."

What would it mean for us to live courageously? On the flip side, let's consider living without courage. Such a life is best described as "safe" if not "boring." Few risks are taken so as not to lose what one has, but by living this way, what one has isn't much—at least, not as much as it could be. Not that I always live courageously. But I can remember several times taking a brave leap and finding much happiness afterwards.

What are acts of courage? I don't mean acts like bungee jumping or skiing double black diamonds, although these do involve a great degree of bravery. In my mind, acts of courage are things like speaking up when we see something wrong, moving to a new city, or trying to have a baby after a miscarriage. It is these types of risk-taking (if not soul-wrenching) acts that truly resemble acts of courage.

If we're afraid to do these sorts of acts because of a threatening co-worker, a heavily populated city, or a frowning relative, we can read  Psalm 27:1 which says, "The Lord is my light and my salvation—whom shall I fear? The Lord is the stronghold of my life—of whom shall I be afraid?" If God is most important to us, then the only relationship we don't want to risk ruining is our relationship with Him.

When I think of going far in life, I think of “getting the glory.” But to do that, we have to “have the guts.”
In  Romans 8:37, we are called "conquerors." Label yourself as a "conqueror" today and see what you do. Make "Eye of the Tiger" your theme song and see what risks you take. Now I say, even sing, "Rise up—straight to the top. Have the guts—and get the glory."

"Eye of the Tiger" by Courtney Loy is licensed under a Creative Commons License. Heartlight encourages you to share this material with others in church bulletins, personal emails, and other non-commercial uses. Please see our Usage Guidelines for more information.

Courtney Loy practices marriage and family therapy and writes frequently for Hope for Life, an outreach of Herald of Truth Ministries. You can reach her by writing to courtney@hopeforelife.org. (Visit the Author's Website)

Self-Destructive Power in Building Monuments to Ourselves
In absolute arrogance and stupidity, the people of the plains of Babylonia set out to make a name for themselves.

It All Hinges on This
How can we know if our lives make a difference and truly matter?

He Entered Your World
God drew near to us in Jesus, so why would we not come to him with our challenges, troubles, and trials?