Why put off to next week that which can be put off till ...? 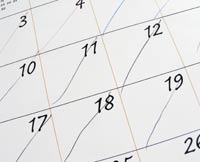 So Joshua said to the sons of Israel, "How long will you put off entering to take possession of the land which the LORD, the God of your fathers, has given you?" (Joshua 18:3 NASB)

Procrastination is the avoidance of some task that needs to be done. Everybody does it. There are circumstances under which it is appropriate, even necessary. But it is a serious problem for people who make it a way of life.

Professor Piers Steel of the University of Calgary recently reported on the research he has been doing for ten years on people who procrastinate. Made public in a journal published by the American Psychological Association, the study says it is harder to wean people from the habit of putting things off than from alcohol. But it is such a self-defeating practice. Is it a problem for you?

Yes, everybody puts off certain things — from cleaning out the garage to going to the dentist to getting the big presentation finished. And some of those delays (of major or dreaded projects) are for the sake of finishing up lesser tasks that will clear the decks for concentration on the big ones. That's understandable. But people who fritter away their time on little things and never get around to the bigger, more important tasks are quite literally cheating themselves.

Dr. Steel says that only about five percent of Americans thought of themselves as chronic procrastinators in 1978. However, that percentage is now 26 percent. Men are worse than women, and the young are more likely to put off important things than older people. And procrastination makes its devotees poorer, more apt to be obese, and unhappier with their lives in general.

Big tasks are abstract and easy to delay!
Experts say it helps to break big, dreaded tasks into small increments. I've found that to be true. So "I've got to do my taxes" is better put as "I'll pull all my receipts and tax documents together Saturday" — so long as Saturday is mid-February rather than mid-April. "That garage has to be cleaned up" is likely better approached as "I'll do something about the yard equipment today." Big tasks are abstract and easy to delay; specific ones are manageable and less threatening.

The same people tend to advise other helpful things like seeing positives about outcomes rather than obsessing on the drudgery of getting to them. They also talk about incremental rewards built into the process. Believe it or not, they stress taking mandatory time off, vacations, and breaks from work. If every day is presumed to be a work day, a sense of never-ending duty wears one down.

The thing that inclines me to put things off, I've figured out, is my own unreasonable sense of needing to do things perfectly. Does that ever figure into your procrastination? The presentation has to be just right. The report has to include every possible piece of data. In order to feel confident, you need to anticipate every possible question and know just what you'll say. An imperfect job completed is far better than a perfect one endlessly delayed.

What is the most important task on your radar?

And now for the really important question: What are you going to do today toward getting it done?

"Procrastination" by Rubel Shelly is licensed under a Creative Commons License. Heartlight encourages you to share this material with others in church bulletins, personal emails, and other non-commercial uses. Please see our Usage Guidelines for more information.