Can you make it just one hour? 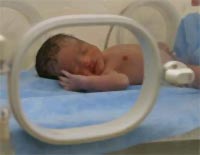 by Denise Waldrop (12/06/2006) | Just for Women
My son, Kenny, was born seven weeks early. He stayed in the NICU for eight weeks. It was a long time for a new mama to leave her little baby. I would drive the forty minutes to the hospital every day and sit with him. I would hold him, feed him, change his diaper, chat with the nurses and other parents, and then leave him to go home at the nurses' shift change. The leaving him there was very difficult. These were dark days that seemed to stretch on forever. We had no idea when he would come home.

One of those days before I went to the hospital, I was on the phone with my friend, Margaret. I was telling her that I couldn't make it. I just couldn't do it again — go to the hospital, sit awhile and then leave at the nurses' shift change.

I began to cry at the overwhelming task in front of me. That's when Margaret told me I didn't have to see myself to the end of the NICU day. She asked if I could make it through the next hour?

One hour? Sure, I could make it just one hour. With all the driving that would only be about fifteen minutes! She suggested I try making it two hours — sure, I could do two hours! Shoot, I could make it to the shift change if I just took it one hour at a time! I was so happy to just go for four hours that I felt wonderful!

I jumped in the car and went to care for my preemie. When the shift change rolled around, I was amazed it had come so quickly! I had made it! Since I had done it that day, I knew I could do it again!

Now, whenever tough situations come up, I try not to see it all the way to the end. I try to see only a little ways ahead.

I was amazed it had come so quickly!

What about it? Can you make it just one hour! I bet, with His help, you can even make it till the "shift change"!

"Shift Change" by Denise Waldrop is licensed under a Creative Commons License. Heartlight encourages you to share this material with others in church bulletins, personal emails, and other non-commercial uses. Please see our Usage Guidelines for more information.