Don't let Satan rob you of your identity in the Lord. 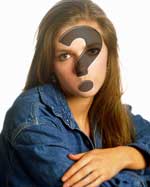 by Phil Ware (12/01/2003) | Two Minute Meditations
Well, one of the biggest shopping days of the holiday season has come and gone for those of us in the USA. Yes, I'm talking about the Friday after Thanksgiving. In my neck of the woods, some stores opened as early as 5:30 a.m. to give folks that extra boost in shopping time! Spend, spend, spend and charge, charge, charge. Huge crowds, big sales, and lots of money!

This year, however, there has been considerable concern over identity theft. Television news and special information programs have voiced concern. Credit card companies have placed fliers on identity theft in their monthly statements. Special protection plans and special services can be purchased to protect and supposedly monitor our credit identities to protect them from theft. Paper shredders are now much more in vogue as we become more and more aware of how important it is to destroy anything with our Social Security number and our other identity sensitive documentation.

In such a time, I believe it is also helpful for us as Christians to think about our identity and how desperately Satan is trying to help us lose it! He is the original master at identity theft. His desire is to make us doubt who we are and whose we are. He wants us to doubt our future and our citizenship. He wants us to question our ultimate victory because of our occasional failures. Most of all, he wants us to doubt the love of our King and our Father.

We see the evil one's ultimate desires when we see the demon-possessed man in Mark 5. One of the most striking realities of this whole story is the man's identity; we never know his name! Even though Jesus asks the man to give his name, he cannot. "Then Jesus asked, 'What is your name?' And the spirit replied, 'Legion, because there are many of us here inside this man.'" (vs. 9) Satan had effectively stripped the identity from the man as he isolated him to the place of death (the grave yard — vs. 2-3), caused him to inflict on himself bodily harm (cut himself and battered himself with stones — vs. 5), and made the poor man uncontrollable (couldn't be bound with chains or shackles — vs. 3-4).

While we rarely see someone so completely controlled by the power of the evil one and his minions, Satan's intentions are still the same — loss of identity, isolation, death, self-abuse, and loss of self-control. However, Jesus came to bring us deliverance every bit as real and powerful as the man in Mark 5 received from our Lord. Paul declares this deliverance God has brought for us when he writes the Christians in Colossae: "For he has rescued us from the one who rules in the kingdom of darkness, and he has brought us into the Kingdom of his dear Son." (Colossians 1:13) We shouldn't be surprised that Paul has already reminded these Christians that they are "God's holy people" and that they share in God's inheritance (Colossians 1:2, 12). Deliverance from Satan's power means a new identity (cf. 2 Corinthians 5:17).

Deliverance from Satan's power means a new identity.
Satan's desire to make us doubt our identity and doubt the care of our God isn't anything knew. His attack on the first man and woman was focused specifically at the relationship Adam and Eve had with God (Genesis 3:1-5). As Jesus faced Satan in 40 days of temptation in the desert, the first words out of the evil one's mouth were, "If you are the Son of God." Fortunately God had just prepared his Son for such an attack by declaring, "This is my Son, whom I love; in him I am well pleased." So we shouldn't be surprised that as Paul writes to new Christians in Thessalonica, he affirms their identity and their work in the Lord (1 Thessalonians 1:1-4). When he later writes those who are struggling with their new identity and their old sinful way of life in Corinth, he does a very similar thing, reminding them of their precious and holy new identity in God (1 Corinthians 1:2-9). To those who live in the seat of the Roman Empire's authority, Paul reminded them of their relationship with God as Abba Father. As God's children, they were heirs of God — just like Jesus Christ, in whom they had a victory that Satan, death, nor anything else could steal from them. (Romans 8)

As believers, we need to help each other remember that new identity and to encourage each other to live passionately as members of God's Kingdom of light (Hebrews 3:12-14). In this world, we may feel like strangers and exiles, but we are actually God's holy and special people called to live a life based on our new identity (1 Peter 1:1-2, 13-16; 1 Peter 2:9-12). So in this season when we will hear so much about identity theft, let's use that warning to be our own spiritual warning. We must not let Satan steal from us our passion for living out our new identity in Christ as God's holy, precious, and victorious children.

"Identity Theft?" by Phil Ware is licensed under a Creative Commons License. Heartlight encourages you to share this material with others in church bulletins, personal emails, and other non-commercial uses. Please see our Usage Guidelines for more information.

The Shear
We are called to live in the strong currents where Jesus' Kingdom meets the world and those trapped by darkness, and we need to know there is both danger and richness as we live in 'The Shear.'

Give Your Fears to the Father
How remarkable that Jesus felt such fear. But how kind that he told us about it.

ToGather: I Daily Choose Jesus' Cross! (June 13, 2020)
Jesus put fresh depth of meaning into the words 'love' and 'cross' because of WHO he is and WHAT he did!