What do you do to comfort those who lived through today so long ago? 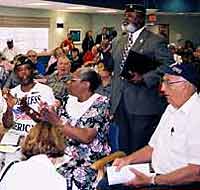 by Jerry McCaghren (11/11/2006) | Together in His Grace
I visited an old warrior the other day. He was in a psych ward at a VA Hospital. His life has been spent in one VA Hospital after another. He once walked straight and tall but now he is bent and trembling. His voice once spoke with certainty but now it is hesitant and halting at times. He suffers from PTSD, Post Traumatic Stress Disorder. His medicine cabinet is filled with psychotropic medications designed to muffle the re-occurring sounds of war. He takes his meds to dull the pain of battles fought over sixty years ago ... and he is still fighting them. He is haunted by war. His friends died there. And for all practical purposes he did too.

We sat. He spoke. We listened ... my wife and I. Periodically, he would look up as he spoke. But mostly, he looked all around. Wild-eyed. Trembling. Anxious. Agitated. He wrung his hands. His eyes darted all around the room. His speech was garbled and slurred at times due to the medications. Pain was written all over his face. We traveled with him across the beaches of Normandy ... through the battlefields of Germany and into a little village in Hungary. "War makes you mean," he said.

Occasionally, he would go quiet for several minutes. It was a pause pregnant with anticipation. Something was about to be shared that would be sacred. Some memory revealed that I would never forget. He then broke the silence.

"I remember the day I went off to war. I was a young man." He paused again looking around the room as if trying to gather his thoughts. "It was like yesterday. I was at the train station in Dallas. Uncle Sam called. I answered. I was a soldier. My brothers were there. My sisters. My family. My sisters clung to me. They were sobbing."

He suddenly became quiet, staring off into the distance. I waited for him to speak again.

"The train had pulled into the station. All the soldiers were kissing their loved ones. Entire families had come. The sobs of mothers and fathers could be heard over the roar of the train's engines. Final embraces. And for some ... final goodbyes ... forever! My sisters continued to hold me and wouldn't let me go. I was trying to act like a soldier but not doing it very well. And then my mother spoke."

When he mentioned his mother, his demeanor softened. For a moment, his thoughts drifted from distant battlefields to his beloved mother. She was a short, stocky woman of German descent. Tough. Determined. Patriotic. Spiritual. Daughter of God. She knew her Creator and knew Him intimately. For her, each day was greeted with prayer. And when the darkness fell and the stars glistened in the heavens, she ended her day on her knees talking to her Father. And throughout the day she punctuated every step with thanksgiving and praise. Her life was filled with hardship, but her faith matched all that could be thrown at her.

When the old soldier spoke of his mother, the pain was momentarily erased from his face. Calmness came. Suddenly, we stood on sacred ground. Words were well chosen. He bowed out of reverence. I leaned forward to listen because I knew this might be my last chance to hear the story.

"My mother was standing a few feet away and spoke to my two sisters. 'Clifford, Lillian, you girls let Raymond go.' And then she said: 'Raymond, you go serve your country faithfully. You be the best soldier in the field you can be. And you remember that your mother will be on her knees praying for you every day."

"I was a young man."
With that, his hands came up to his face covering his eyes. The tears squeezed between his fingers and ran down his face. He trembled. I brushed away my tears. My wife wept.

Several minutes passed. He struggled to regain his composure. It never returned. With eyes welling up with tears he said, "Knowing that my mother was on her knees praying for me is what sustained me throughout the war."

We talked for a few more minutes. His nurse came around and told him it was time for his next group session. The psychiatrist was waiting. With that, we stood, prayed, and embraced. Perhaps it was our last embrace.

I watched him go down the long hallway, a hallway filled with broken warriors from distant battlefields in years gone by, and then he disappeared. One day soon, that old warrior is going to die. I long for that day. I pray for that day. Because I know that when that day comes, my Dad will be at peace for the first time in over sixty years.

"Old Warriors" by Jerry McCaghren is licensed under a Creative Commons License. Heartlight encourages you to share this material with others in church bulletins, personal emails, and other non-commercial uses. Please see our Usage Guidelines for more information.

Jerry McCaghren has served as pulpit minister for the Alpine church of Christ in Longview, Texas for the past fifteen years. He received his education from Abilene Christian University (1981) and Amberton University (1995). Jerry and his wife Nancy are the proud parents of two children and nine grandchildren.