Sometimes the most profound grace is based on simple action. 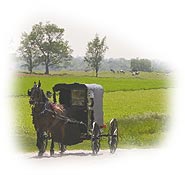 by Rubel Shelly (10/24/2006) | Special Features
The Amish have adopted something of a fortress mentality against the modern world. They do not confront the world beyond their communities with prophetic denunciations. Neither do they embrace the ways and means of a technological society wholesale. There are good things about their simple ways.

The best-known features of the Amish way are not for everybody. And some of them seem not only “peculiar” but contradictory to their literalist beliefs. For example, the Bible’s appeals for modest dress are meant to keep people from drawing undue attention to ones self. But what could draw more attention to a person in a crowd than eighteenth-century hats and clothes, hairdos and shoes?

In the wake of the shooting of ten little girls in the West Nickel Mines Amish School and the death of five of them, some things more noteworthy than the quaint dress of these pietistic people have come to public attention. They are far harder to come by than hook-and-eye fasteners. And they ought not to be preserved by a mere handful of people who live in out-of-the-way agrarian cultures.

For one thing, the Pennsylvania community of Amish who had been victimized by such horrible violence had the dignity to grieve together out of the public eye. They appointed no media spokesperson and hired no lawyers to file lawsuits. They huddled together, prayed for grace, and buried their dead.

As they carried the bodies of children to be buried, they did not route the procession of horses and buggies so as to avoid passing the house of the murderer. They even invited his widow and children to grieve with them.

When the 32-year-old man who had killed their children was buried, dozens of members of the Amish community were at the service. They joined in grief with his survivors. And when a fund was established to receive money for the burial expenses of the murdered girls and the medical expenses of the surviving ones, they insisted that the killer’s family be helped from the same charity.

A "Detroit Free Press" columnist said: “To an outside world that understands recrimination better than redemption, it was a dumbfounding spectacle.” Indeed!

What our world needs so desperately is not a shutdown of electrical grids, the abandonment of computers, and the universal adoption of farming. We need the dignity and grace that come of a God-centered life. We need to learn humility, pardon, and unselfishness. We need to close gaps and build community.

We need the dignity and grace that come of a God-centered life.
Whether you wear jeans or a business suit, you too can become part of a unique and transforming experiment. Where might you begin the process today?

Get rid of all bitterness, rage, anger, harsh words, and slander, as well as all types of malicious behavior. Instead, be kind to each other, tenderhearted, forgiving one another, just as God through Christ has forgiven you (Ephesians 4:31-32 NLT 1st Ed.).

"Simple Dignity" by Rubel Shelly is licensed under a Creative Commons License. Heartlight encourages you to share this material with others in church bulletins, personal emails, and other non-commercial uses. Please see our Usage Guidelines for more information.