The People Behind You

Who are you blazing the trail for? 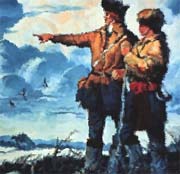 by Alan Smith (04/29/2006) | Timely Truths
A teenager, Elizabeth, was nervous as she took the wheel for her first driving lesson. As she was pulling out of the parking lot, the instructor said, "Turn left here, and don't forget to let the people behind you know what you are doing."

Elizabeth turned to the students sitting in the backseat and announced, "I'm going left."

Though it may not have been understood properly, the instruction of the teacher was a valuable piece of advice: "Let the people behind you know what you are doing."

Jesus is "the author of our salvation" (Hebrews 2:10 NKJV) That phrase can also be translated as "the pioneer of our salvation" (RSV) because the Greek word used in this verse ("archegos") was a word sometimes used for a pioneer or trailblazer who opened up a territory so that others could follow.

I love the Appalachian Mountains. I have often wondered what it would have been like in the early 1700's to cross those mountains — no interstates, not even any dirt roads, just trees and bushes. There were mountain men who had braved the frontier, but there was no safe and reliable way to get settlers over the mountains. What was needed was for some brave man, a "pioneer," to open the west by finding the best mountain passes and building a passable road to the west.

But you, too, are called to be an "archegos," a pioneer who blazes the way for others to follow. There are those who work with you and live around you who are looking to you as they struggle to find the way in their own lives. You may have children, grandchildren, great-grandchildren and countless others who will be influenced by the legacy you leave behind. Choose your path carefully. And let the people behind you know what you are doing.

"The People Behind You" by Alan Smith is licensed under a Creative Commons License. Heartlight encourages you to share this material with others in church bulletins, personal emails, and other non-commercial uses. Please see our Usage Guidelines for more information.