What if we actually treated everyone we meet as if they were friends? 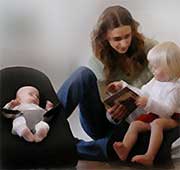 by Russ Lawson (04/27/2006) | Special Features
A week or so ago I met a lady named Phyllis at my new place of work. Right off she said, "You probably don't remember me, do you?" I said that I was sorry, but I didn't remember meeting her before. She said, "That's alright, I used to play with you when you were a baby and when your mother wanted to spank you we would grab you up and run away from her."

Obviously she didn't expect me to really remember her, but she got a kick out of the memory. I asked my mom about her and she said, "Oh yes, I used to baby sit those kids when I was a teenager!" I guess it's possible to sometimes have known someone and still not remember them or even see someone and not recognize them.

It's not a new problem and I suspect that it will always be a problem for people as long as there are people. I admit that I am terrible with names. I usually have to meet someone several times before I can stick the right name with the face. It's not unusual for us to recognize a person's face, but just not be able to place them by name or maybe even by where we have met them.

Jesus gives us a perfect example in where he says:

"But when the Son of Man comes in His glory, and all the angels with Him, then He will sit on His glorious throne. All the nations will be gathered before Him; and He will separate them from one another, as the shepherd separates the sheep from the goats; and He will put the sheep on His right, and the goats on the left."Then the King will say to those on His right, 'Come, you who are blessed of My Father, inherit the kingdom prepared for you from the foundation of the world. For I was hungry, and you gave Me something to eat; I was thirsty, and you gave Me something to drink; I was a stranger, and you invited Me in; naked, and you clothed Me; I was sick, and you visited Me; I was in prison, and you came to Me.'

Now I don't know if Phyllis was working for Jesus when she saved me from a spanking almost 60 years ago and I sure don't put myself on the level of Jesus. I probably didn't even appreciate what she did then, but I can appreciate her efforts on my behalf, because I was one of the "least" of these when she did it.

Who can you reach out and touch for Jesus?

"Unremembered Friends" by Russ Lawson is licensed under a Creative Commons License. Heartlight encourages you to share this material with others in church bulletins, personal emails, and other non-commercial uses. Please see our Usage Guidelines for more information.