This decade is a lot more than just the passing of ten years! 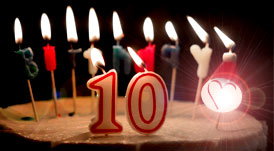 Ten Years Later!
Heartlight officially launched on April 3, 1996 without advertising or fanfare. This month, we celebrate the past ten years and thank those who have helped us along the way. In conjunction with this tenth anniversary, Phil has also launched a blog and you are invited to share the conversation and leave a comment or two.

It's been a decade of grace!

Wow, I can still remember the first time I heard the word decade. I wasn't even ten years old. At that time, a decade seemed like forever. But for me, the last ten years has been a decade of grace!

A decade ago, I had just started wearing bifocals. Now I have to have special glasses for computer work and they have to have bifocals, too. A decade ago I had two kids at home and life was busy with the stuff of parenting — sports and teenager stuff. And a decade ago, exactly to the day — April 3, 1996 — Paul Lee and I launched Heartlight. It's been a decade of grace!

We had no idea what we were doing — we probably haven't changed all that much in that area — we only knew that we were supposed to do the "Heartlight thing" to faithfully answer the call of God. Paul was a graphic designer and I had written short spots for the radio and I had a couple of friends who had other similar content — thanks Randy Becton and Paul Faulkner for sharing. So God put Paul and me together. Six months prior to that day ten years ago in April, we had not even known each other. It's been a decade of grace.

I still remember watching the traffic numbers those first few months hoping we would get fifty or sixty visitors per week. Then as web traffic picked up, we started hoping and praying that we would get to 50,000 page views by the end of the year — we got there with a little extra change. Now a decade later, God has blessed us with 3.7 million page views per month. It's been a decade of grace!

In those first few months of Heartlight, a group of Christians who homeschooled their children in Australia found us. Our traffic jumped up significantly almost over night. Since then, God has expanded our community to over 175 nations of the world. We've heard heart-wrenching and heart-warming stories from all over the planet. God has expanded our concept of Kingdom significantly. It's been a decade of grace!

With the help of a longtime and respected friend, Dennis Downing, we were able to launch a Portuguese parallel to Heartlight, called Iluminalma.com.br. Dennis' work has been remarkable, faithful, and fruitful. It's been a decade of grace!

We recently began a first step into Spanish, laluzdelama.com, with the help of friends and ministry partners, Jack and Beatrice Walker. We anticipate launching a Heartlight in German in January of 2007 with the help of Bill Wilson — a new friend, fishing buddy, and long-time Christian servant in Cologne. We are waiting for some financial support so we can launch a Russian version, Heartlight.ru, with the help of friends in Abilene. These friends are helping Russian immigrants and streaming sermons via the Internet into Russia to share Christ with Russian seekers. To work and partner with such people is a great gift. It's been a decade of grace!

"Thanks be to God!"
Which brings me to you! Yep, I'm talking to you — the person reading this article. People like you, from all over the world, from all sorts of backgrounds, have been brought together on the Internet by one common denominator — we've been blessed by the grace of God! Yes, it's been a decade of grace.

So we come to you and say, "Thanks be to God!" We also want to say, "Thanks!" to you as well. Please keep us in your prayers. Let us know how we can continue to grow and improve. If you feel touched by God, we could use your continuing support. Most of all, we ask that you pray for our protection and health. We need you to ask for God's provision for Heartlight and continued blessing for us. We hope that you will continue to pray for our spiritual wisdom so we can know the direction the Lord is leading us. Finally, we genuinely ask you to request that God will be honored and His children worldwide will be blessed. Hopefully, as the Lord wills, in another ten years we can come to you and say once again, "It's been a decade of grace!"

With God’s power working in us, God can do much, much more than anything we can ask or think of. To him be glory in the church and in Christ Jesus for all time, forever and ever. Amen. (Ephesians 3:14-21 ERV)

"Decade of Grace" by Phil Ware is licensed under a Creative Commons License. Heartlight encourages you to share this material with others in church bulletins, personal emails, and other non-commercial uses. Please see our Usage Guidelines for more information.