Would you have given a boy with these struggles a chance? 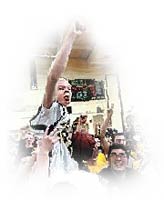 by Rubel Shelly (03/19/2006) | Leading in Hope
You’ve probably heard the story of Jason McElwain by now. If not, you can go online for a great video.

Jason is a senior at Greece Athena High School in Rochester, New York. He has had some tough breaks in life. But most of the other kids at his high school treat him with respect. He tries hard. People like him. He has been pretty visible this year as manager of the varsity basketball team. He is autistic.

His autism has been a major “bad break” for J-Mac, as his friends call him. Autism is a brain disorder that typically shows itself in problems with socialization and communication. Some people find it hard to be around persons with autism.

J-Mac has the good fortune of attending a school that does everything possible to integrate students with developmental issues into the mainstream of life. Coach Jim Johnson even added him to the team roster for the final basketball game of the season. He hoped to get him in the game for a few minutes. He wanted J-Mac to have the experience. To get a team jersey. To cherish a memory. But he had no idea things would turn out as they did.

With Greece Athena well in the lead and four minutes left on the clock, Johnson put J-Mac in the game. And the kid did the unthinkable! After missing his first two shots, he scored 20 points in three minutes – 18 by draining three-point shots from the perimeter. The team carried him on their shoulders in celebration.

“This is the first moment Jason has ever succeeded and been proud of himself,” said his mother. “I look at autism as the Berlin Wall, and he cracked it.” Her greater dream for her son is that he can get a high school diploma.

Hooray for Jason. Hooray for the attention this story has gotten not only in local news but in national media. And hooray for the encouragement and hope this heartwarming episode will bring to families dealing with similar challenges.

“I’ve had a lot of thrills in coaching and I’ve coached a lot of wonderful kids, but I’ve never experienced something like this ever in my life – you know, other than my own family things,” Johnson said. “My emotions, I couldn’t stop crying.”

Thank God for people who give other people a chance!

"A Coach's Choice" by Rubel Shelly is licensed under a Creative Commons License. Heartlight encourages you to share this material with others in church bulletins, personal emails, and other non-commercial uses. Please see our Usage Guidelines for more information.