How much are you willing to forgive? 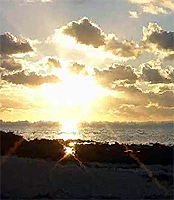 Get rid of all bitterness, rage, anger, harsh words, and slander, as well as all types of malicious behavior. Instead, be kind to each other, tenderhearted, forgiving one another, just as God through Christ has forgiven you. (Ephesians 4:31-32 NLT)

Scripture affirms that humans are "sinners" — lawbreakers, evildoers, people who have fallen short of the divine ideal. But lawbreaking isn't the real point. We have broken God's heart by failing to experience the good he created us to know and to embrace the peace and joy he intended for us. We are less "sinners in the hands of an angry God" than prodigal children away from home.

In Chicago last week, 44-year-old Russell Sedelmaier was in court to be sentenced. He had murdered Ivon Harris, 65, and his 24-year-old daughter, Sarah. Harris was a Lutheran pastor, and his daughter was a fifth-grade teacher. Sedelmaier was interrupted while burglarizing the Harris home and murdered the two victims by beating them brutally and slashing their throats.

Eileen Harris, the wife and mother of the victims, was also in court that day. She too is an ordained minister and serves as in-house chaplain for a nursing and rehabilitation center. As various family members made victim-impact statements, hers was particularly powerful and especially important to the court.

Dressed in a black suit, the petite woman described the pain and loneliness she had experienced since the crime. Then she called the murderer's name. "Russell," she said. Sedelmaier didn't look up. "Russell," she repeated. When he raised his head, she continued: "Because I value the gift of life and I know God forgives and loves all of us — especially you, Russell — I support a sentence of natural life." Heavily influenced by her statement, the judge sentenced the man who would have been eligible for the death penalty at trial to life without parole.

All of us get hurt by people who break rules, violate law, and betray trust. And it is hard — some even contend impossible — to forgive those people. Really? Tell that to Eileen Harris! Criminals and cads need to be held accountable. Their evils should not be minimized. And consequences are very real and painful.

Has someone lied about you? Stolen your promotion? Taken credit for the work you did? Is she guilty of flirting with your husband? Betraying a confidence? Spreading a rumor about your child? Forgiveness is difficult even to consider.

Yet the burden of scorn, anger, or hatred is so heavy it warps the soul. Better to pray for strength to forgive than the chance to get even. Until we have as much justification as Mrs. Harris, she rebukes our reluctance to try to forgive.

"Your Forgiveness Scale" by Rubel Shelly is licensed under a Creative Commons License. Heartlight encourages you to share this material with others in church bulletins, personal emails, and other non-commercial uses. Please see our Usage Guidelines for more information.