Lord of the Banquet

What makes a man truly great? 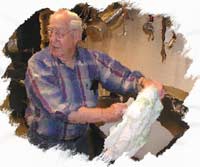 by Mart Waltenbaugh (11/23/2005) | Just for Men
Stuffing, mashed potatoes and gravy, football, olives, turkey, rolls, more football, friends, relatives, sweets, another football game, sleeping in, a day off, sweat pants with an elastic waistband, football highlights on ESPN, and desert. That's what Thanksgivings are about. Did I mention football?

I have to admit, this devotional is biased, it's gender specific ... it's for guys like me who think Thanksgiving is a holiday made to honor the hard working male of the species. After all, God wouldn't put all that football on TV in one day if he didn't intend for us to spend the day with our feet up cheering for our favorite teams, would he? Besides, my wife is the best Thanksgiving cook in the world, and her mom will be here to help. There can't be room for me in the kitchen with all those cooks around! No doubt about it, at least to this legend in his own mind, being male on Thanksgiving allows us to take the place of honor.

Did you know that Jesus had something to say about the place of honor?

"But when you are invited, take the lowest place, so that when your host comes, he will say to you, 'Friend, move up to a better place.' Then you will be honored in the presence of all your fellow guests. For everyone who exalts himself will be humbled, and he who humbles himself will be exalted." (Matthew 23:12)

There's no greater place of honor.
"He who humbles himself will be exalted." Jesus was speaking to a group of people who held a well established and prominent place among God's people — the Pharisees and the experts in the law. The previous verses are the conclusion of a parable that he had told them as he watched them pick the places of honor at a meal. He asked them to do something that was way out of their comfort zone — take the lowest place at the meal. If they would, they would be exalted by those present and, I believe, by God.

So here's the challenge to all of us football drones on Thanksgiving Day. Let's make up our minds to give up the seat of honor before the television and do the dishes — yes, all the dishes. Or, let's have the cooks sit down once the meal is done and we serve them the meal — like a waiter at an elegant restaurant. If we really want to sacrifice, let's turn off the television and play with the kids or get those tasks completed that our wives have been asking us to do for weeks now. There's no greater place of honor for us than the lowest place at the banquet.

Jesus said it. So, do we really believe it? Then, let's go out and practice it!Father, you are at the highest place. Your throne is the seat of honor, yet you have gone to such depths to serve us. Help us to imitate your spirit this Thanksgiving Day and sprint for the lowest seat. Give us a mind like that of Jesus who would serve and not sit, love and not lounge. Mostly, Father, glorify yourself this holiday as we give thanks for all you've done for us. In Jesus' name, amen.

"Lord of the Banquet" by Mart Waltenbaugh is licensed under a Creative Commons License. Heartlight encourages you to share this material with others in church bulletins, personal emails, and other non-commercial uses. Please see our Usage Guidelines for more information.