What do birds have to do with it?

How can we be kept safe in today's world? Phil has an answer in today's video. 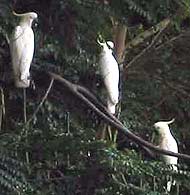 by Elizabeth Price (11/12/2005) | Special Features
The white Cockatoo is an Australian parrot. They live in the eastern mountains in huge flocks. Years ago, people found sights and views not known before and small communities were established in those isolated places simply by following these large flocks of Cockatoos. In time, a train line was built through the enchanting countryside to the wonderful sights across the Illawarra Escarpment with its views of the ocean and on to a little town called Robertson.

The journey came to be known as "The Cockatoo Run." It is still valued by the train drivers who travel it as much as by nature-loving tourists. Talking about it, a train driver said, "It reminds me of another story. I regularly drive a freight train across a bridge and under the bridge there was a permanent water hole where an Eel had made his home. We would often see the Eel basking in the last rays of the setting sun on a rock near his pool. Sometimes we would see him swimming around in it. Then a severe drought crept across the land. It took its toll beneath the bridge, the water dried up and the Eel moved away."

The Eel reminded me of someone else who had to move house. His name was Elijah. There was an awful drought in the land and the water dried up, just like it did at the Eel's home. So God told Elijah to leave home and live near a brook called Cherith. Then God sent a Raven to provide Elijah with food every morning and every evening. It was one of a series of very serious life changes for Elijah. (1 Kings 17:1-6)

Jesus knows about making serious changes. He understands our losses and our grieving because he left his home, too. He left heaven when he came to earth to live with us. He even had to flee for his life as a refugee with his parents during a bad political time. During his most trying times, most of his friends forsook him and he faced his worst moments alone. He knows how we feel about serious changes and he assures us he is with us.

"I will never fail you. I will never forsake you." That is why we can say with confidence, "The Lord is my helper, so I will not be afraid." (Hebrews 13:6-7)

"The Cockatoo Run" by Elizabeth Price is licensed under a Creative Commons License. Heartlight encourages you to share this material with others in church bulletins, personal emails, and other non-commercial uses. Please see our Usage Guidelines for more information.