What really matters to the emerging group of young adults? 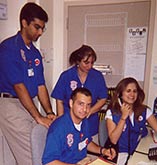 by Phil Ware (06/20/2005) | Two Minute Meditations
Much has been written about the emerging new generation of adults often referred to as Millennials. As so often happens, those who are older and who have a different focus to life often speak using dire terms to describe the coming new generation. Yet the difference between the generations currently "in control" and the Millennials is enormous. It is more than a generation gap; we are seeing a shift in world culture that most experts say is as large as the shift from the Dark Ages to the Renaissance — this shift is a movement from a modernist mind set to what is called post modernism.

Those who wring their hands about Millennials (also called post moderns) often point to their lack of belief in absolute truth — something we'll look at next week — and a deep distrust of scientific or religious explanations and the smarmy "good intentions" talk of baby boomers. Yes, folks, we are in for a major culture shift. However, rather than wringing our hands, let's take heart. Even more than that, influencing Millennials should move us to putting our lives where our mouths are in our religious walks. There are many things about this emerging group that should give us hope and make us take heart. Let's look at just a few.

First, this group recognizes that it has a deep spiritual hunger; their skepticism with scientific empiricism's answers has opened their hearts to seek for spiritual insight. Some of that hunger can take them in horribly dangerous spiritual places, but it also opens the door for the world view of the Bible, and especially the books of Acts, Ephesians, and Colossians as they seek to find answers in a universe bigger than what science can explain.

Second, this group longs to have multi-generational connections; rather than disdaining older folks, they seek friendship and understanding from those who have lived many years and tried to do so with integrity and vibrancy. Incredible opportunities for interaction await those willing to engage in relationship across the shift of cultural boundaries.

Third, Millennials want religion that is experiential and genuine; phony-sounding religious talk or religious-political bombast, especially when not backed up by honestly living out ones religious "sloganeering," is anathema — the worst of all dishonesties. Ready to volunteer to help others and searching for a real sense of community, Millennials are willing to get involved with groups that make a real difference in people's lives. Professed faith in Christ must be backed up by good works, compassion, and community or religious talk will be considered irrelevant by this group.

In the recently released movie "Batman Begins," we get a glimpse of this emerging culture's search for values. In a godless landscape of poverty and crime set against the extravagance of scientific advancement and modernistic cities, we find a few yearning souls — young and old — who are desperately seeking to rid the world of evil and do what is right. Benevolent idealism has fallen victim to wickedness and corruption. This idealism is powerless to hold off the overwhelming tide of real evil. The other alternative to idealism is a high-tech and highly skilled group of self-appointed utilitarian vigilantes who want to ruthlessly eradicate wickedness from society. This group proves to be as evil as the wickedness it seeks to destroy.

The defining line in the movie is emphasized twice: "It's not who I am underneath, but what I do that defines me." The line, so true to the millennial spirit, is a reminder that any true solution must be more than just good intentions; it must come to life in the real world through genuine action. This point of view doesn't mean that motives and intentions are unimportant; it just means that if we don't move beyond the sweet and benevolent sounding motives and intentions to demonstrable and helpful behavior, then those motives and intentions are irrelevant, at best.

Of course this point of view finds a clear voice in Scripture:

Dear brothers and sisters, what's the use of saying you have faith if you don't prove it by your actions? That kind of faith can't save anyone. Suppose you see a brother or sister who needs food or clothing, and you say, "Well, good-bye and God bless you; stay warm and eat well" — but then you don't give that person any food or clothing. What good does that do?
So you see, it isn't enough just to have faith. Faith that doesn't show itself by good deeds is no faith at all — it is dead and useless.
Now someone may argue, "Some people have faith; others have good deeds." I say, "I can't see your faith if you don't have good deeds, but I will show you my faith through my good deeds."
Do you still think it's enough just to believe that there is one God? Well, even the demons believe this, and they tremble in terror! Fool! When will you ever learn that faith that does not result in good deeds is useless? (James 2:14-20 NLT)

In the beginning the Word already existed. He was with God, and he was God. He was in the beginning with God. He created everything there is. Nothing exists that he didn't make. Life itself was in him, and this life gives light to everyone. The light shines through the darkness, and the darkness can never extinguish it. ... So the Word became human and lived here on earth among us. He was full of unfailing love and faithfulness. And we have seen his glory, the glory of the only Son of the Father. (John 1:1-5, 14)

The door is open for believers who are interested to influence the future in profound ways by investing themselves in Millennials. If we will embrace, encourage, and provide an example to those who are entering adulthood and are looking for a foundation for life that is genuinely lived by those who profess it, God can use us to be a bridge to faith for Millennials! Let's make sure our churches and our hearts are open to the searching souls who will find their satisfaction only in a Jesus-centered life, but who will only find it in communities who do ministry as Jesus did — down and dirty in the middle of the real world of desperation and brokenness.

"Beyond Intentions" by Phil Ware is licensed under a Creative Commons License. Heartlight encourages you to share this material with others in church bulletins, personal emails, and other non-commercial uses. Please see our Usage Guidelines for more information.