Playing Through Your Pain 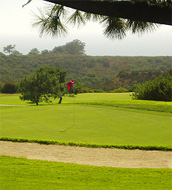 by Rubel Shelly (07/25/2008) | Just for Men
Whether you play golf or not, you surely know the name Tiger Woods. So bear with me. This week's article (from FAX of Life) isn't so much about golf as life.

Almost a month ago now, Tiger outlasted Rocco Mediate in this year's U.S. Open. Playing the course at Torrey Pines in San Diego, the two were tied after four days. They were still tied at the end of an 18-hole playoff. Tiger won on the first sudden death hole. Some say it was the greatest U.S. Open in history.

No, the score wasn't the lowest ever. No, it wasn't won by an eagle from the fairway. No, there was no miracle shot that ended things. The miracle was that the man who won was able to complete the competition.

Tiger Woods played the tournament with a torn anterior cruciate ligament and two stress fractures below the left knee. As I watched part of the Open on TV, it was obvious that the world's greatest golfer was in excruciating pain at times. His powerful swing would contort his whole body, wrench his injured knee in particular, and register quite dramatically on his ordinarily poised face.

Golf is only a game, but watching a professional athlete compete through such pain was inspiring. He could have simply withdrawn because of the injury. Fans would have been disappointed but would have understood. He could have played to his pain and hit the ball less aggressively. He might have fallen back into the pack and taken a high score and low finish. He would have none of it.

Tiger played through his pain. He wouldn't quit. He gave his best on every hole. He insisted on playing to his full potential — even when that potential was putting both his body and mind under incredible stress. Hooray for him!

The winner of this year's U.S. Open had successful reconstructive surgery on his damaged knee about ten days later. He will miss the remainder of this year's PGA tournament events, of course, while he rehabs the knee. But few people doubt he will be ready to play the tour next year. He is, after all, Tiger Woods. He is the ultimate competitor. He doesn't quit.

As you're deciding what to do with yours, think about why so many people are speaking of Tiger Woods with such admiration these days — even the folks like me, who hardly know which end of a golf club to hold.

"Playing Through Your Pain" by Rubel Shelly is licensed under a Creative Commons License. Heartlight encourages you to share this material with others in church bulletins, personal emails, and other non-commercial uses. Please see our Usage Guidelines for more information.