What's your favorite way to sing? 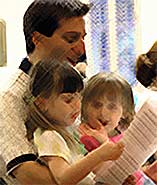 When I was a boy, much of every church service was singing. It was not always harmonious, but it was usually enthusiastic.

I also still remember my grandmother singing hymns as she went about her daily chores.

My mother was often the song leader at the church — though no one would have ever called her that. The man who stood before the congregation would announce the number and then say, "Sister Grace, would you pitch the song for us?" What he meant was for mother to begin singing the first line.

My folks were all singers. You could hear my father's resonant bass voice as he sat with the men at the front, which was the custom in those days.

King David has been called "The Sweet Singer of Israel." It has always been interesting to me that his psalms are so popular, but not as songs — which they were — but as readings. Only a handful have been put to music in our day, yet they were likely the songs of the early church which we seek to emulate.

In recent years there has been considerable disturbance within the churches over the "song service." It is nothing new. Every change in form has brought serious contention. I am not a music historian, but I imagine there was difficulty when Latin chants were being replaced with English words. I know there was division over four part harmony and when the words of hymns were put into book form.

Church music changes! It is that simple. I did not say I liked change. Like most "old folks," I like what is familiar to me. That does not in any way negate the fact that change will come. I think what is typical of most of us "elderly" folks is that we don't mind change — just as long as it is not in our lifetime. (Smile) My plea is just that ALL the old not be sacrificed on the altar of ONLY new. Even in saying this, I have to admit that some of my favorite songs have come into being in the last few years.

Do you know what really bothers me? It is the fact that so few sing. I have always taken my seat on next to the front row. That is one row back from the traditional "preacher's row" of my youth. I have done so because I wanted to sit with my family. Every once-in-a-while, I find myself sitting near the back. It is always distracting to me. I see the people whispering, the children shouting, but most of all, I see the people not singing. Sometimes I see one who has been highly vocal in their opinion about the singing, not singing at all — not just on one type of song or another, but throughout the entire period of worship. I try to think they just have a sore throat or something, but I know that is not generally true.

I shall sing of Your strength!
God's people that we meet in the Bible are constantly singing! Both the Old and New Testaments are filled with songs. Whether it is Israel or the followers of the new path, singing is a constant companion. Jesus sang, Paul could sing even in prison, and church assemblies were filled with song. We are encouraged to both teach and praise in song. (Colossians 3:15;  Ephesians 5:19) For those who may feel "less than professional in their vocal endeavors," the Word reminds us that God's music is made in the quality of the heart, not the quality of the voice.

Join the psalmist when he sings:

"Rise Up Singing" by Bill Sherrill is licensed under a Creative Commons License. Heartlight encourages you to share this material with others in church bulletins, personal emails, and other non-commercial uses. Please see our Usage Guidelines for more information.