How have you been conditioned? 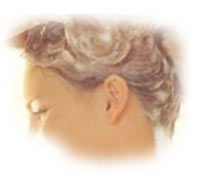 by Elizabeth Price (05/15/2005) | Just for Women
I had been shopping and had bought some hair conditioner. I am fairly fussy about the sort of conditioner I use and read the fine print. Putting it in the bathroom cupboard, it taught me — with a jolt — something about a puzzling story in Scripture I have had difficulty understanding.

Jesus was on his way to Jerusalem to die — it was not exactly a song and dance party. In the poignancy of the walk, Jesus drew his twelve disciples aside and took them into his inner confidence.

"I'm going to be condemned to death and then handed over to the Gentiles," he virtually told them. "They will spit on me, flog me and kill me. After I have been dead for three days, I will live again."

Potent stuff. I would have been goggle-eyed. Forget intergalactic wars and third encounters and all that playroom nonsense, here was a real flesh-and-blood thriller. So what did the twelve good men and true do with the blockbuster of the ages?

A couple of them said something like, "Okay, if that is the scenario, then give us ringside seats in the house." Of course all the other disciples got mad at them, and a general squabble erupted over who should have the best seats.

Can you believe it? These were the most privileged men anywhere, anytime, on the face of the earth and they turned it into a schoolboy squabble. I could never understand why — that is, not until I put the conditioner into the cupboard and it hit me like a rocket.

They were conditioned. They grew up in Israel and they were taught from babyhood that the Messiah was coming. The teachers emphasized that they would be delivered from oppression. They were taught that there would be an abundance of food, water, building materials, animals for transport — whatever your dream was, it would come true. They were conditioned to believe it would be like that.

Nobody remembered the fine print found in places like  Isaiah 53:

he was pierced for our transgressions;

he was assigned a grave with the wicked;

They ignored the fine print.
he was reckoned among the transgressors.

Nobody remembered the fine print in  Psalm 22, with its piercing cry, "My god, my God, why have you forsaken me?"

They ignored the fine print. Confronted with the most awesome reality of eternity, their conditioning prevailed. They went back to the playroom and got out the toy theatre.

And I am not sure I would have been any different.

In a Christian bookshop recently, I saw conditioners all over the shelves. Endless books that built endless toy theatres about the future while they ignored the fine print.

So a word about conditioners: choose carefully and read the Messiah's fine print.

"Conditioners" by Elizabeth Price is licensed under a Creative Commons License. Heartlight encourages you to share this material with others in church bulletins, personal emails, and other non-commercial uses. Please see our Usage Guidelines for more information.