What can't you do? 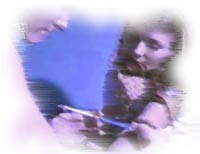 by Teresa Bell Kindred (04/06/2005) | Just for Women
For the past year I have worked with a program that was specifically developed to help teenagers in danger of dropping out of school. To say the job is challenging would be an understatement. I was raised in a home with two parents who loved me and made sure I went to church every Sunday. I grew up thinking that the rest of the world had the same sort of home I did. I couldn't have been more wrong. The problems my students deal with on a daily basis would make any soap opera on television seem tame. Because I want to protect their privacy, I'm not going to use real names in this story; but I want you to meet a few my students. My life has been enriched by knowing them, and after you read this, I think you will see why.

Brenda is a very quiet girl who is fairly new to my program. Her mother died about a year ago, her father is remarried to a woman she doesn't like and there are no other real family members who live in our area. Brenda is eighteen and lives in the house her mother left her, with only her pet cat for company. She can't afford to pay her heating bill, so she's moved a kerosene heater into one room and keeps the door shut to stay warm. She's trying to work, go to school, and pay her bills. She's struggling just to survive. She is extremely intelligent, but she is frequently absent from school. She is definitely college material, but will she make it there? I don't know; she has a mountain of problems to climb.

Another girl, Sybil, came to me this week and confessed she was addicted to drugs and wanted help. I spent the day dealing with social services, school personnel and her family. It wasn't easy to get everyone to cooperate to get her into treatment. Even though she asked for help, the grandparents — who are raising her because the mother gave her up when she was just a baby — didn't believe anything she told them. In a way, I can see why: Sybil's lied to them many times. But, she wasn't lying about this. I'd suspected for awhile that she was using and I wasn't the only one. Like Brenda, Sybil has a mountain to climb, but hers is Mount Everest.

Sybil's mother has done crank for so long she only has six teeth left. Beside all the problems that come with crank, her mom is schizophrenic. One of Sybil's greatest fears is that she'll end up like her mother. Recently, her mother spent time in jail for beating up a man. Sybil was so distressed the whole time her mother was incarcerated that she acted out those frustrations at school. She was in and out of detention for weeks. Then when her mother was finally released, Sybil was thrilled ... until her mother told her to find something else to do as she wanted to spend time with her boyfriend.

The day Sybil asked me to help her get into rehab, I sat with her at Lifeskills until 6 p.m. When I left her, I kissed her goodbye, hugged her, and tried to keep back my tears. As I write this, she is in a hospital being evaluated. She'll be there at least 72 hours. After that, it's possible she'll be released and go back to her grandparents' house. Will she be strong enough to say "No!" the next time someone offers her drugs? She's only sixteen, too young to be climbing Mt. Everest alone.

I left Sybil and went to hear one of my students speak to a youth group at a local church. From the first time I met Todd, I knew he was different. It wasn't until I heard his life story that I knew why. The room where Todd spoke was packed with teenagers. Todd held us spell bound for over an hour. He began by telling us about his childhood. His parents were alcoholics who verbally and physically abused each other on a regular basis. He told us how he became addicted to drugs and eventually joined a gang. He spent years stealing to feed his drug habit and then became a dealer. He eventually broke enough laws that he was wanted by the police; so he fled.

For over a year and a half, Todd was on the run. By the time he was 17, he found himself in Michigan, far from the small Kentucky town where he'd grown up. He drifted around with unseemly characters and ended up in a Satanic church. He went to a party, got high and stoned, was beaten, robbed, and almost killed. Driven beyond despair and filled with self hate, Todd put a gun to his head. Before he could pull the trigger, he heard a voice whisper, "Todd, go to church. Go to church."

Todd called the one person he knew who attended church, a distant cousin. Todd not only attended a service, he became a member there. Now he carries a Bible with him wherever he goes — including my classroom — and he counsels troubled teens. He ministers to prisoners at the local jail and speaks to youth groups. After he finished telling his story, he was surrounded by teenagers. I managed to push my way to him, hug him, and then I left. I walked to my car with a lump in my throat and tears on my cheeks.

All the way home, my thoughts swirled around in my brain like dark gray storm clouds. So many times I look at the teenagers in my class and think, "No way, they'll never make it." But I should be looking at them and thinking, "I can't change their lives, but God can!" I felt as if Jesus were looking right at me, down into my soul, and saying to me as he did to his disciples, "Humanly speaking, it is impossible. But with God everything is possible." (Matthew 19:26 NLT)

Don't hold back!
The teenagers in my classroom are not the only at-risk teens in the world. All teens are at-risk in some way. We all are. The world is a dangerous place and Satan is prowling about seeking whom he may devour. Peer pressure has its greatest hold over kids from the ages of 12-21, and even so-called "good kids" can make bad mistakes. We need to pray daily for the teenagers in our church, our community, and the world. We especially need to reach out to those in need.

Don't hold back because you think you can't make a difference or you think there is no way they will listen to you or care what you say. Remember Todd's story and have faith, because even though you can't, God can!

Jesus looked at them intently and said, "Humanly speaking, it is impossible. But with God everything is possible." (Matthew 19:26)

"When I Can't, He Can!" by Teresa Bell Kindred is licensed under a Creative Commons License. Heartlight encourages you to share this material with others in church bulletins, personal emails, and other non-commercial uses. Please see our Usage Guidelines for more information.