Why can't we see the good in kindness? 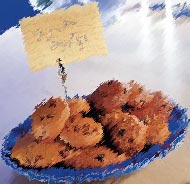 by Rubel Shelly (03/26/2005) | Special Features
Last summer, a couple of teen-aged girls in rural Durango, Colorado, chose to stay home from a dance and use the night to bake cookies for their neighbors. Taylor Ostergaard and Lindsey Zellitti ran the idea past Taylor's dad — whose approval was contingent on getting a few cookies for himself — and began baking around 9 p.m. They prepared nine plates of cookies, made heart-shaped cards with the message, "Have a great night. From the T and L Club." They then put them on people's front porches anonymously. They rang or knocked — and disappeared.

Since it was after 10, Taylor and Lindsey determined not to stop by houses that were dark. They'd only go where the people were still up and had lights shining. Their chocolate chip and sugar cookies could be bedtime treats.

Talk about your random acts of kindness. Or just old-fashioned good neighborliness. But there's more to the story.

One of the recipients was a 49-year-old woman at home with her own 18-year-old daughter and her mother. She heard the knock at her door. She called out, "Who's there?" Getting no answer, she called the sheriff's office. Officers came, found the cookies, and determined that no crime had been committed.

The unnerved cookie recipient couldn't get over it. She went to her sister's house for the rest of the night. Next morning, she went to a hospital emergency room with an upset stomach. She was diagnosed as having suffered a panic attack. What a terrible backlash from something with such good intentions.

The two girls learned what had happened and wrote letters of apology. "I didn't realize this would cause trouble for you," said Taylor's note. "I just wanted you to know that someone cared about you and your family." The girls' parents offered to pay the woman's expenses from the hospital visit.

She wouldn't accept! She said the apologies didn't ring true and weren't delivered in person. So she sued the girls! Her lawsuit claimed about $900 in medical fees and raised the issue of punitive damages for "pain and suffering." A Durango judge awarded the $900, but no punitive damages. Only in America!

"I just hope the girls learned a lesson," said the woman who sued them. Oh, I'll bet they did! We can only hope it's not the cynical lesson that kindness is only so much wasted energy or that courts are capricious places these days.

What a terrible backlash!

As we close this week, we all remember another act of graciousness — far greater than cookies and a card — that went unappreciated. God sent his Son to serve and to bless the lost, broken, forgotten, and powerless. We also remember another capricious court decision that surrendered the Son of God to be crucified before a jeering mob. Most of the world still does not know — or does not care — about such a divine sacrifice. We rejoice that God did not give up on doing kind things for us because of the ungratefulness of some. We hope that Taylor and Lindsey don't give up on their kind deeds, either.

"No Good Deed Left Unpunished" by Rubel Shelly is licensed under a Creative Commons License. Heartlight encourages you to share this material with others in church bulletins, personal emails, and other non-commercial uses. Please see our Usage Guidelines for more information.