Straightening Out the Curve Balls

Do you think God can really turn around any bad situation? 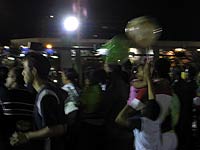 I listened as our mission campaign leader shared his preference for things running smoothly and without un-necessary surprises. Having been responsible for other groups on mission trips, I understood him perfectly. Little did we know, our trip would be filled with "curve balls." However, we would ultimately see that most of these "curve balls" were blessings.

In fact, the "curve balls" started before we left on our trip. The leader of the country we were visiting began ranting and raving against North Americans and the U.S. president, making things very tense before we even left on our trip. The early part of our trip, however, went without incident. The singing group performed well all over the city — private schools, large corporate auditoriums, and even the city symphony. At each of these, our group leader spoke a brief Christian message and invited folks to visit with the church on Sunday. We handed out fliers and warmly greeted all in attendance.

All was going well and the momentum was building toward a big concert in a new city park at a key intersection in town on Friday night. Then we received the bad news: the large company that was crucial for permission to use the park had pulled their sponsorship. Their sound team which was bringing the sound system for the park concert was also pulled. Some in their leadership didn't want to be associated with a group from North America, at least not publicly with tensions so high. Even though the group had performed at their corporate auditorium, they were not going to be publicly associated with us.

We were disappointed with this last minute "curve ball," but our South American host church went to work and we all began to pray. To make a long story short, God straightened out the "curve ball" and turned it to our advantage.

Another large corporation stepped up and helped us gain use of the park. Another sound company was found to do the sound for the park concert — one owned and run by some backsliding church members who team members wanted to visit, but would not have an opportunity otherwise. The sound team from the company that had cancelled the park concert was so upset at the cancellation that they provided a great sound system for another outdoor concert at the church building on Saturday night.

Not only did things work out, they worked out better! What Satan had intended for harm, God had turned to our advantage. The end results were terrific. By the time Sunday morning came around, the mission church had a record attendance and 111 first time adult visitors. They made a large number of new contacts and received much wider positive exposure in the city. Three were baptized into Christ on that Sunday morning and many more were brought into a relationship with Christians and an interest in learning more about Jesus.

Our mission team wasn't surprised at the result. Part of the reason is that we've seen God work through these kinds of situations before. An even bigger reason we weren't surprised has to do with what many of us will celebrate this next Sunday — Jesus' resurrection. God sent Jesus to redeem all humanity. Satan thought he was throwing God the ultimate "curve ball" by having Jesus murdered on the cross. However, God used this horrible event to be the basis of our victory over sin and death and our assurance of a home with him.

We weren't surprised!
Even in the worst of times, when it seems as if nothing is going right, please don't give up. God redeems the worst of situations, brings light to the darkest of nights, and straightens out the most wicked of "curve balls" for our advantage — and no week demonstrates this more than the one we remember at this time of year.

And we know that God causes everything to work together for the good of those who love God and are called according to his purpose for them. For God knew his people in advance, and he chose them to become like his Son, so that his Son would be the firstborn, with many brothers and sisters. And having chosen them, he called them to come to him. And he gave them right standing with himself, and he promised them his glory. (Romans 8:28-30)

"Straightening Out the Curve Balls" by Phil Ware is licensed under a Creative Commons License. Heartlight encourages you to share this material with others in church bulletins, personal emails, and other non-commercial uses. Please see our Usage Guidelines for more information.