Does anything really matter if morals don't matter? 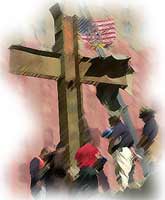 by Rubel Shelly (03/12/2005) | Leading in Hope
Our self-indulgent culture is teetering on the brink of an important insight: We have been mistaken to reject our common-sense belief in right and wrong.

More than a quarter century ago now, some of our opinion leaders came up with the idea that tolerance is the single real virtue and that self-esteem is the most important element in child-rearing and education. That misguided notion was rooted, in turn, on the earlier thesis that there are no fixed moral standards that apply to all people everywhere and at all times.

With absolute standards abolished, all that mattered was acting with some degree of consistency with one's culture when possible and always with a view toward personal self-realization and happiness. Everything from sexual behavior to spelling and grammar to corporate bookkeeping became "just your opinion." And the uniform mantra for child-rearing and education was limitless praise.

Have we ever paid a price for traveling that path! Promiscuous sex, drug abuse, unlimited abortion rights, suicide — why not? It's my body, and nobody can tell me what to do! Businesses producing child pornography, music to glamorize violence against women, and television to legitimate homosexuality — why not? There are groups that value such things, and it's just terrible to be judgmental!

Religion has had very little credibility for stemming this tide. It discredited itself long ago with its abuse of power, hairsplitting judgments, and neglect of the very people with whose life circumstances Jesus was most directly involved.

Could these things be connected?
So today every child athlete gets a ribbon; every adult athlete gets a pass for anti-social behavior. Fifth-graders all get smiley faces and A's; every college student needs counseling for a D or red ink on a paper. Immature children are permitted to throw tantrums as self-expression; employees can't understand why promotions and raises aren't automatic. Could these things be connected?

Psychologists and educators who blazed the trail of boosting self-esteem and protecting children from failure are now reversing course. The unyielding realities of an adult world that requires showing up, doing real work, and being accountable have combined to pop the bubble of phony praise. Self-esteem really is important, but "Whatever you do is great!" is neither true nor helpful.

The answer isn't cumbersome rules, hypocritical religion, and nitpicking morality. It is mutual respect among persons who see the image of God in one another and who create communities where right and wrong can be distinguished.

"Unbending Realities" by Rubel Shelly is licensed under a Creative Commons License. Heartlight encourages you to share this material with others in church bulletins, personal emails, and other non-commercial uses. Please see our Usage Guidelines for more information.