You Know How it Feels

Do you really know how it feels? 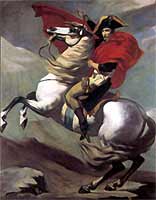 by Alan Smith (02/19/2005) | Timely Truths
During Napoleon's invasion of Russia, his troops were battling in the middle of yet another small town in that endless wintry land, when he was accidentally separated from his men. A group of Russian Cossacks spotted him and began chasing him through the twisting streets. Napoleon ran for his life and ducked into a little furrier's shop on a side alley. As Napoleon entered the shop, gasping for breath, he saw the furrier and cried piteously, "Save me, save me! Where can I hide?" The furrier said, "Quick, under this big pile of furs in the corner," and he covered Napoleon up with many furs.

No sooner had he finished than the Russian Cossacks burst in the door shouting, "Where is he? We saw him come in." Despite the furrier's protests, they tore his shop apart trying to find Napoleon. They poked into the pile of furs with their swords but didn't find him. Soon, they gave up and left.

After some time, Napoleon crept out from under the furs, unharmed, just as Napoleon's personal guards came in the door. The furrier turned to Napoleon and said timidly, "Excuse me for asking this question of such a great man, but what was it like to be under those furs, knowing that the next moment would surely be your last?"

Napoleon drew himself up to his full height and said to the furrier indignantly, "How could you ask me, the Emperor Napoleon, such a question? Guards, take this impudent man out, blindfold him and execute him. I, myself, will personally give the command to fire!"

The guards grabbed the furrier, dragged him outside, stood him against a wall and blindfolded him. The furrier could see nothing, but he could hear the guards shuffle into line and prepare their rifles. Then he heard Napoleon clear his throat and call out, "Ready! Aim!" In that moment, a feeling he could not describe welled up within him; tears poured down his cheeks.

Suddenly the blindfold was stripped from his eyes. Although partially blinded by the sunlight he could see Napoleon's eyes looking intently into his own — eyes that seemed to see every dusty corner of his soul.

Then Napoleon said, "Now you know."

The list could go on and on. Eventually, I would get to what weighs on your soul. You have friends who try to comfort you by saying, "I understand," but deep down you know they don't; they can't, not without experiencing it for themselves, and you wouldn't wish that on them.

The list could go on and on ... and eventually, I would get to what you have suffered in the past. It was painful. It was tough to get through. But having done so, be aware of the opportunities you now have to be of service to others. You know exactly how they feel. Let them know that.

All praise to the God and Father of our Lord Jesus Christ. He is the source of every mercy and the God who comforts us. He comforts us in all our troubles so that we can comfort others. When others are troubled, we will be able to give them the same comfort God has given us. (2 Corinthians 1:3-4)

"You Know How it Feels" by Alan Smith is licensed under a Creative Commons License. Heartlight encourages you to share this material with others in church bulletins, personal emails, and other non-commercial uses. Please see our Usage Guidelines for more information.