What are you trying to carry around with you that is hindering you? 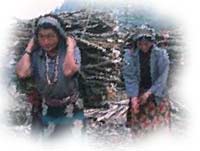 One man robbed a liquor store at gunpoint and demanded all of the cash from the register. He then asked for some liquor, but the cashier declined saying that he didn't look 21. The robber again demanded, but the cashier declined saying that he could not give liquor to anyone under 21. The stupid criminal proceeded to show the cashier his driver's license to prove he was 21! The cashier took down his information, gave the robber his liquor, and called the police when he left. The robber was arrested AT HIS HOME later that evening.

Another guy was in a verbal lineup — a police line up where you have to say something to see if the victim can identify you by voice. He was told to say, "Give me your money or I'll shoot you!" He refused to do it. When asked why he wouldn't say it by the detective, he said, "Because that's not what I said"!

David Posman, 33, was arrested in Providence, R.I, after allegedly knocking out an armored car driver and stealing the closest four bags of money. It turned out they contained $800 in PENNIES, weighed 30 pounds each, and slowed him to a stagger during his getaway. Police officers easily jumped him from behind.

We can get bogged down!
David Posman is not the first person to make the mistake of trying to run while being weighed down. In fact, it happens spiritually all the time. The writer of the book of Hebrews talks about sin being a weight that keeps us from effectively running the Christian race. We can get bogged down with things that pull us away from God. And, by the way, as with Posman, those things that are weighing us down are not worth nearly as much as we thought they were when we grabbed hold of them. The Holy Spirit has a message for us:

Therefore we also, since we are surrounded by so great a cloud of witnesses, let us lay aside every weight, and the sin which so easily ensnares us, and let us run with endurance the race that is set before us. (Hebrews 12:1)

Anything weighing you down? May you lay it aside as you run the Christian race today.

"Weighed Down" by Alan Smith is licensed under a Creative Commons License. Heartlight encourages you to share this material with others in church bulletins, personal emails, and other non-commercial uses. Please see our Usage Guidelines for more information.