What are we supposed to do about Christmas? 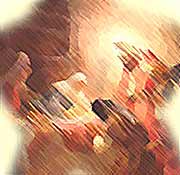 by Jerry Whitmire (12/21/2004) | Special Features
Some might object to writing about Christmas the way it is in the title. However, it is not sacrilegious or necessarily demeaning. The English X looks like the Greek CHI (pronounced KEY). It is the first letter in the Greek spelling for the word Christ. The early church appears to have accepted the CHI as an abbreviation for Christ.

It's that time of the year again when many think and re-think what the correct posture, position, and practice for the Christian should be concerning Christmas. I see a lot of positives and negatives with the way Americans celebrate Christmas.

There is the controversy over the tree. Some say the house is okay but not the church building. Some say both are okay and some say no tree in either place. Since the Bible does not address this specifically, I would say do what your conscience allows without binding your position on others as Bible doctrine.

At the same time, we should allow for the conscience of others and keep our observance a personal family matter. Personally I do not consider, nor do I observe Christmas as a Holy day, but as a holiday. I have a tree, but have never been tempted to worship it. I personally do not get upset if a Christian reads, talks, or sings about the birth of Jesus in December. Also, I do not make fun of those who do not share my "opinions" about gifts, trees, and Santa Claus. I wish I had not said that name, because in my opinion there are a lot of problems with how some present Santa. Who else do you know that can be all over the world in one night? Who else knows what you did and are doing in secret? And on and on we could go ... but I won't. Above all, in matters of faith let's have unity. In matters of opinion let's have love and forbearance.

One of the great things about this time of the year is people are thinking about the birth of Jesus. Although no informed person really believes Jesus was born December 25th. We do believe that Jesus was born, and that's the vital part. God really became a human in the person we call Jesus! There are many responses recorded in the Bible to His birth.

If we can say with the following ...

We do believe that Jesus was born!
Then the world will say like the following ...

God became a human to help solve the mess we made of life. What a great motivation to keep "Growing in Love with God, the Lost and One-Another."

"What about Xmas?" by Jerry Whitmire is licensed under a Creative Commons License. Heartlight encourages you to share this material with others in church bulletins, personal emails, and other non-commercial uses. Please see our Usage Guidelines for more information.