Ahead of My Time

When is running late being ahead of schedule? 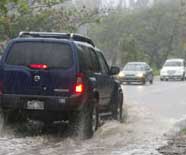 by Kelly Breece (09/22/2004) | Just for Women
After the last button was fastened on my cardigan, I grabbed my perfume bottle for a hurried mist, and, while glancing at the clock, raked things from the counter into the drawer. As always, I gave myself one hour to get to the other side of town. With three minutes to spare, I decided to go back for one more kiss from Shane, who had crawled into bed with Daddy after getting his first cup of milk."Boy, I took longer than I thought!" I said to myself as I climbed into the car. It was already fifteen minutes after the hour and beginning to rain; but I knew that if traffic wasn't bad, then I could still make it to work with a one or two minutes left. With every commute to work comes a decision: I can choose to take the interstate and risk being tied up behind a wreck, or I can choose to take the side roads and risk hitting every red light from here to town. Two minutes after making my choice, I suddenly wished I had made the other. As the red brake lights multiplied rapidly up ahead, I heard on the radio that a four-car crash had just been reported.

My heavily perspiring palms nearly slipped off the wheel when I found my first chance to change lanes and exit the interstate. A momentary sigh of relief came as I broke free from the sluggish traffic and whisked onto the side road. I knew just which way to go; unfortunately everyone else had already ingeniously decided to do the same thing. Everyone coming into town from the north was now sitting still. I thought to myself ... if I had only planned better ... if I hadn't gone back in ... if only I had given myself an hour and ten minutes. There's no way I'll make it on time now. This will surely effect the whole day. This is going to be a long ...

Before I could finish my thought, it was drowned out by the escalating rain shower. After what seemed like two hours, I pulled into the parking lot. The clock on the dash said 8:10. I pulled underneath an awning and swallowed hard as the producer of the project walked over to my car.

"I am so sorry for being late. The traffic was horrendous. I'm just so sor ..." I smattered.

"You're not late. It is five minutes before eight. You're the first person here. And besides, our client's plane was delayed because of all the rain. You might want to check your clock."

I looked down and remembered that I had intentionally set my car clock for fifteen minutes fast so that I would never feel anxious going to work!

That afternoon, after a good day at work, I walked in the door, grabbed a cold glass of ice tea, and plopped down on the couch with the most confident intention of taking a relaxing, cozy nap. For the first time in months, I gave myself permission to let go and simply "spend time." It was wonderful.

I awoke to my surprise with my toddler standing in front of me, nose to nose. He wasn't sure what to think of Mom not rushing around the house in the afternoon.

"Just restin', honey." I quickly realized what he'd been doing when I raised up and found his tennis shoe Velcro-ed to my hair. Hands to his face, he giggled, "I gotchoo."

That day God got me too. I was reminded just how much we need Him in every little thing that we do and just how much He does guide us despite ourselves. We try to depend on our ability to "beat the clock" and "beat the system." In the process, we just "beat ourselves up." Where would we be without him?

Look at the birds of the air: they neither sow nor reap nor gather into barns, and yet your heavenly Father feeds them. Are you not of more value than they? And which of you by being anxious can add a single hour to his span of life? (Matthew 6:26-27)

"Ahead of My Time" by Kelly Breece is licensed under a Creative Commons License. Heartlight encourages you to share this material with others in church bulletins, personal emails, and other non-commercial uses. Please see our Usage Guidelines for more information.