Are you willing to join Jesus in the Garden? 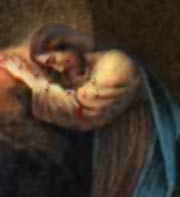 During the days of Jesus' life on earth, he offered up prayers and petitions with loud cries and tears to the one who could save him from death, and he was heard because of his reverent submission. Although he was a son, he learned obedience from what he suffered and, once made perfect, he became the source of eternal salvation for all who obey him ... (Hebrews 5:7-9)

A thin, flimsy strand of silver moonlight connects heaven to earth and barely illuminates a Middle-Eastern garden. A man lies prostrate there, looking from a distance indistinguishable from the three other men sleeping nearby. But venture a little closer, quietly and respectfully. This solitary man isn't asleep at all. At first, you hear the groans and sobs. A few steps closer and the prayer they punctuate becomes audible. Then, you see the fingers digging into the dirt and you recognize that this man is in agony. Not physically, like he will be in just hours ... minutes. He is in agony emotionally and spiritually.

This man is a student and this garden is his classroom. You've stumbled upon the last lessons before his final exam. Shocking thought, really, when you recognize just who this is. The Creator of the Universe, learning? The One Before Whom Every Knee Will Bow, being schooled? Hard to comprehend, isn't it? But that's exactly what's happening here in Gethsemane. "God With Us" is learning what it means for a human being to ignore his clamoring fears and stifle his screaming instincts and trust God instead. "The spirit is willing, but the body is weak." Those words don't just describe the disciples to whom he spoke them. They describe him as well, this night. His spirit knows what must be done and waits to walk obediently into what God has designated as his destiny. But, his flesh hasn't caught up yet. So as the moments tick by and the priests and temple police fall in line behind a treacherous friend, Jesus wrestles alone with his fears and impulses.

Make no mistake; the cross wasn't a done deal when Jesus walked into this garden. He could at any time have put a stop to the whole thing. He could have listened to his fears and followed the impulses of his flesh right out of Jerusalem. What was that he said to Peter: "Do you think I cannot call on my Father, and he will at once put at my disposal more than twelve legions of angels?" Think that was the first time it had crossed his mind to whistle for the cavalry?

It is as much a heresy to make Jesus less human than he was as it is to make him less God than he was. To rob him of humanity is to dismiss Gethsemane as just a bit of drama for the benefit of his followers. It was not just a bit of drama; it was a battle over whose will would carry the day. It was a war to bring flesh in line with spirit.

It was a preview of the war his followers still fight.

If you've felt the pull of sin, the encroaching, spirit-freezing cold of doubt, the sting of fear, the fires of anger, or the numbness of boredom, then you know the war Jesus fought in Gethsemane. You've fought that war before, haven't you — fought it on a thousand different fronts? You fought it when your children taxed your patience. You fought it when a lie looked so attractive and the truth so difficult. If you've ever been confronted with the allure of illicit sex, if you've ever been tempted to cheat on a test, if you've ever struggled with the desire to take what isn't yours or to take credit for what you didn't do, you've been with Jesus in the garden. You're a veteran of the same war if you've ever wanted to stay quiet when God wanted you to speak out, or if you've ever wanted to stay comfortably at home when God was sending you out to serve. If you've ever wondered whether your ministry made a difference — if there was any real reason to keep on — you've fought what Jesus fought in Gethsemane. In fact, you are the battleground. Your willing spirit versus your weak flesh.

It's in those struggles that human beings find strength.
Sometimes it makes you feel guilty, doesn't it? Well, don't. If Jesus had to fight that battle, if his spirit and flesh clashed, then why should you expect it to be any different with you? Why shouldn't you have to pray and sob and grieve and sweat blood sometimes to follow through with your Father's will? Jesus did it alone, but remember that you're in good company. The Son of God himself will stay awake and watch and pray and weep with you. He knows the struggle first-hand. He knows the horrible disconnect of flesh and spirit that don't line up.

So know that when you pray like he did, he hears and nods and smiles. He doesn't look with disdain on those struggles. He does not regard them as weakness, because he knows from experience that it's in those struggles that human beings find strength. Continue to fight, knowing that your Savior is sympathetic to your predicament.

However, I can imagine that he doesn't appreciate it much when we don't fight at all — when we don't even bother to enter the garden. I can imagine it still frustrates and even angers him when we make the same mistake as countless other disciples and doze off when we should be watching and praying — fighting the battle. Too often we never even fire a shot. We never kneel before the Father, confess our weakness, and announce our intention to do his will anyway. We never even ask him for the strength to want to do his will. And I imagine that it just drives the one who sweated blood in Gethsemane crazy when we lay back and allow our weak flesh to overcome our willing spirits without so much as a quick prayer.

So step a little closer, there in the garden of your mind. Get close enough to smell the fear and sweat and to hear even the whispered prayers. Lie down beside him with your face to the ground, and join him in the battle. Acknowledge with him the weakness of human flesh and announce with him your intention to follow him in the will of the Father. Just like his, your prayer will be heard, too.

Class is now in session.

"Class Now in Session" by Patrick D. Odum is licensed under a Creative Commons License. Heartlight encourages you to share this material with others in church bulletins, personal emails, and other non-commercial uses. Please see our Usage Guidelines for more information.