In Tandem with Jesus

Will we let Jesus be the Ringmaster of our lives? 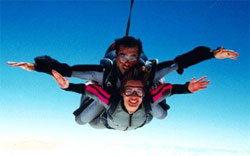 by Janice Price (06/16/2004) | Just for Women
"Would you be interested in reading my story, about how I went from a circus trapeze artist to a quadriplegic?" Vickie asked in an email.

My curiosity was piqued and I ordered both of her books. They were added to the reading material pile where they gathered dust for nearly three years. Recently, I came across them for the umpteenth time. I opened one autographed copy and read, "Janice, Choose joy!" After reading Vickie's story, I understand this wasn't an off-handed comment. Joy was attained only after she came to terms — "God's terms" — with her life after quadriplegia.

Vickie and her husband Gary were practicing a new two-and-a-half-somersaults feat when she lost her sense of direction and plummeted headfirst into the net below. She broke her neck, ending a career she loved. After three years and three suicide attempts, she was admitted to a psychiatric ward for eight-and-a-half weeks. While there, she came to accept that her paralysis was permanent and that she needed help in order to cope with life. She asked God for that help and Jesus became her new "Ringmaster."

Gary left her on the fourth anniversary of the accident. Yet despite her paralysis, Vickie was able to live on her own with assistance from caring neighbors and part time home health aides. She returned to school to get a degree in social work in order to help others with disabilities. Her physical life was an ongoing battle against pain and respiratory problems, but she still maintained a full and active life, as well as a sense of humor.

Vickie was skydiving before she learned to perform on a trapeze. Her performing days ended, but her thrill of skydiving would take a new twist. Tandem skydiving was relatively new at the time she first tried it, but with an experienced instructor wearing a harness with an oversized parachute pack, Vickie could participate.

When Jesus spoke again to the people, he said, "I am the light of the world. Whoever follows me will never walk in darkness, but will have the light of life." (John 8:12 NIV)

Once Vickie turned her life over to God, she "walked" in tandem with Jesus until she died.

"In Tandem with Jesus" by Janice Price is licensed under a Creative Commons License. Heartlight encourages you to share this material with others in church bulletins, personal emails, and other non-commercial uses. Please see our Usage Guidelines for more information.